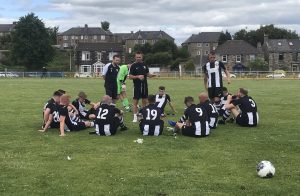 Manager Robin Falcus talking to his team after the match

Whickham scored a late equaliser to come away from their pre-season trip to Scotland with a 4-4 draw against Hillfield Swifts.

Four summer signings were named in Robin Falcus’ starting line-up, with Adam Bartlett, Tom Howard, Lewis Gibbons and Conor Newton all pulling on the Whickham shirt for the first time.

A slow start to the game was punished as Callum Strang put the home side ahead after six minutes and also doubled the lead on 18 minutes.

Matty Pattison drew an excellent save from the ‘keeper on 22 minutes and, despite the striker was tripped up in the penalty area two minutes later, nothing was given.

The former Newcastle United midfielder pulled a goal back for Whickham, just after the half-hour mark, when he found the bottom corner.

Max Cowburn drew the visitors level five minutes later when he curled a free-kick over the wall and past the ‘keeper.

The Swifts restored their lead on the stroke of half-time when another mistake was pounced upon, which allowed Strang to wrap up his hat-trick.

Strang scored his fourth goal on 62 minutes, but the hosts fought back once more. Substitute Kelvin Thear curled into the top corner, four minutes later.

The visitors closed out the game on the front foot and substitute Tom Wharrier bundled the ball home on 85 minutes to ensure Whickham came away with a draw.