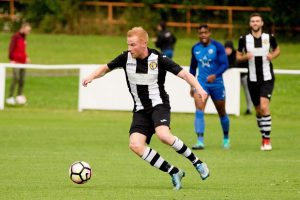 The hosts took the lead after just six minutes and then doubled their advantage on 16 minutes after a quick counter-attack.

Blue Star continued on the front foot and were persistent with their chances in the game before adding a third goal on 38 minutes.

Whickham pulled a goal back when Matty Pattison’s cross was fired home by Galbraith, but, in torrential rain, the pace and tempo of the game was affected.

Chances were few and far between thereafter and the game was brought to a premature end due to the adverse weather.