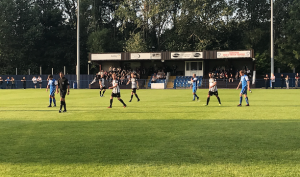 Whickham in action against Dunston UTS

The game itself was in memory of John Farrey and Matty Annan and in aid of The British Heart Foundation.

Dunston had the better chances in the first 25 minutes, while Whickham’s grew into the game and their first opening arrived shortly after.

Matty Pattison drove across the edge of the area before striking through the defender’s legs, across goal, and wide of the far post.

UTS took the lead on 33 minutes when the ball was helped inside to Michael Pearson, who fired across goal and into the bottom corner.

The visitors grew more into the game and closed out the first-half on the front foot. Damien Stevens received the ball in the area, turned, and drew a great save from Karl Dryden.

Ten minutes into the second-half, the visitors equalised Dunston’s centre-half was caught in possession by Bulford, who kept his composure in the area and slotted the ball home.

Whickham went close through Lee McAndrew, Bulford and Clark Kay around the hour mark and continued on the front foot against their Evo-Stik opponents.

The Lang Jacks were denied a second goal by the woodwork. Kyle Oliver intercepted the ball near the halfway line, drove forward, and his rasping strike cannoned off the crossbar.

Neither side managed to find a winner in the closing stages, but it was a great work-out for Whickham, who take on Blyth Spartans on Thursday evening at The First Mortgage Glebe.