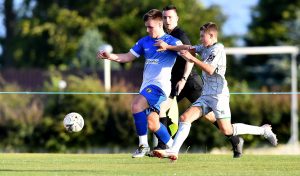 Whickham conceded five second-half goals as National League North side Blyth Spartans were ruthless during their 6-0 win at The First Mortgage Glebe.

The visitors raced out the blocks and went close to opening the scoring inside the first four minutes of the game through Craig Spooner and Dale Pearson.

Blyth went ahead on 23 minutes when Jake Orrell fired home from the edge of the area, while the winger was denied by Adam Bartlett just four minutes later.

Adam Wrightson’s effort whistled over the bar on 37 minutes and Whickham’s first opening of the game arrived a minute later.

Lee McAndrew’s cross was headed towards goal by Conor Newton, but Mark Foden sprawled across to tip the ball over the bar from point-blank range.

Just two minutes after sending an effort inches wide of the post, Adam Wrightson doubled Blyth’s advantage when he cut back inside and struck home.

Blyth had a third goal when Jack Butler stole the ball off the defender, no the edge of the area, and tucked the ball home. Bartlett kept the score at 3-0 with two fantastic saves a minute later.

Butler produced a clever finish, over the approaching ‘keeper, and more misery was inflicted when substitute Ursene Mouanda lashed home and almost burst the net with his strike.

With the final kick of the game, Orrell scored his second of the evening. Whickham will have under two days to recover as they take on Northern League Division Two side Birtley Town on Saturday.