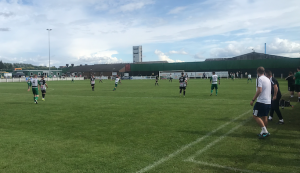 Whickham drew away to Division Two side Birtley Town

Andrew Bulford scored his second goal of pre-season as Whickham were held to a 1-1 draw away to Birtley Town in a pre-season friendly.

After a positive start to the game, the visitors broke the deadlock on 16 minutes. Ross Peareth, after making a crunching tackle in the midfield, found Bulford, who turned and curled home off the underside of the bar.

Lee McAndrew and Carl Finnigan were denied by former Whickham goalkeeper John Mordey before Birtley had their first chance of the game on 23 minutes.

John Sherlock was allowed time to get a pass under control and pick his spot, but the effort struck the post and was cleared away.

The hosts equalised shortly after, with Sherlock turning into the provider as his through ball found Joe Barwick, who fired across and into the bottom corner.

Whickham were denied by the woodwork on 32 minutes when Max Cowburn’s effort cannoned back off the post.

The Lang Jacks closed out the first-half on the front foot and then picked up where they left off in the second-half, with the crossbar denying them a second goal.

Lee McAndrew created room for himself, down the right, crossed into the area and Conor Newton’s glancing header had the ‘keeper beaten, but hit the bar.

Both sides had chances in the second-half, but it was Birtley, who could’ve gone ahead late in the game when Barwick’s header went inches wide of the post.