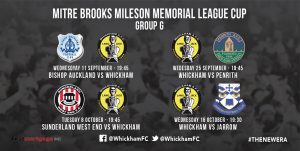 The Northern League has unveiled the new format for the Mitre Brooks Mileson Memorial League Cup.

From this season, there will be a group stage, which consists of five teams and the top two from each of the eight groups progresses through to the Last 16.

Whickham have been drawn in Group G, alongside Division One rivals Bishop Auckland and Penrith and also Division Two sides Sunderland West End – who were promoted from the Wearside League last season – and Jarrow.