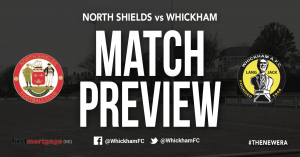 Carl Finnigan scored his first goals in Whickham colours as the Lang Jacks opened the new season with a convincing 3-0 win away to Newton Aycliffe.

The striker opened the scoring at the end of the first-half before winger Kelvin Thear doubled Whickham’s advantage just after the hour mark.

Dale Burrell was fouled in the penalty area late in the game and Finnigan added his second and wrapped up the points.

The Lang Jacks will be hoping for more of the same as they travel to face North Shields, who they haven’t beat since 2013 – albeit the sides have only faced four times since then.

North Shields started the new campaign with a narrow 2-1 defeat away to Sunderland RCA last Saturday.

There’s been a few arrivals and departures for the Robins this summer, most notably, former Northern League Division Two title winner Sean McRoberts, who left for Seaham Red Star.

The Robins, who finished seventh in the table in the 2018-19 season, also named midfielder Adam Forster as the new club captain during pre-season.

The second meeting of the season – in the 2018-29 campaign – between the two sides ended in a convincing victory for the Robins, who won 4-1 at the Daren Persson Stadium.

Whickham only took one point off North Shields in the 2018-19 season and that was in the 1-1 draw at The First Mortgage Glebe, where Mark Doninger scored the Lang Jacks’ goal.

Manager Robin Falcus said: “It’s a huge game. They’ve got some very good players and they’ve got a good crowd behind them too.

“We will probably have one or two niggles and one or two are going on holiday. I think another one is working away, but we also have one to come in.

“We go again. We’ve just got to make sure that the lads are ready. It’ll be tough, but if we can play like we did at Newton Aycliffe then we’ll give teams a game because we were full of energy and it was a really pleasing performance.”