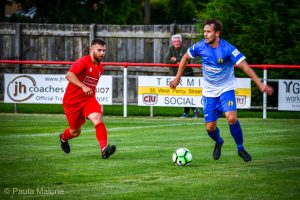 Whickham were undone by a dubious second-half penalty as they were edged out 1-0 by North Shields.

Adam Bartlett kept the visitors level with two brilliant saves in the first-half, while Kelvin Thear hit the post and Carl Finnigan was denied at the other end.

The game turned when the referee awarded a penalty to the hosts, on 66 minutes, despite Dale Burrell winning the ball in the penalty area.

Kyle Patton stepped up and converted the spot-kick and the Robins managed to see the game through to inflict the first defeat of the season on the Lang Jacks.

Manager Robin Falcus made one change to the team that won 3-0 at Newton Aycliffe on the opening day of the season, with Stephen Little coming into the starting line-up for Kieran Galbraith.

The Robins created the first opening of the game when Paul Robinson struck wide of the post from the edge of the area on five minutes.

Conor Newton’s free-kick, on 11 minutes, was gathered by the ‘keeper before Chad Collins’ strike took a deflection, which took the sting out of the effort.

Bartlett, who was with National League North side York City last season, was called into action for the first time on 19 minutes.

Chris McDonald’s cross was nodded down to Connor Campbell, who was unmarked, and his shot was saved brilliantly by Bartlett from point-blank range.

The Whickham shot-stopper was on hand to deny the Robins again, on 25 minutes, when Patton’s low strike was saved low at the near post.

The momentum swung into the visitors’ favour around 35 minutes and they should’ve gone ahead after they created two great openings.

A neat one-two on the edge of the area was followed by a low cross from Collins and Carl Finnigan was denied by the sprawling ‘keeper.

The hosts were denied, once again, by the brilliant Bartlett, who swiped pushed away Rhys Williams’ powerful header.

Just one minute later, the visitors had their head in their hands and were left wondering how they hadn’t broken the deadlock.

Finnigan’s low cross beat Greg Purvis at his near post. An unmarked Thear arrived at the back post, but failed to connect cleanly with his effort and the ball ricocheted off the post.

It was goalless at the break, with both sides creating chances in the first 45 minutes. However, it was the Robins that started the brighter in the second-half.

Paul Robinson’s free-kick curled around the wall and found the side-netting. Meanwhile, just before the hour mark, Lee McAndrew drove forward and had his shot saved by Purvis.

It’s safe to say, what happened on 66 minutes, left the hosts aggrieved. Ben Christensen’s cross was headed down in the penalty area and Burrell was on hand to clear the lines.

The midfielder, as well as the rest of the team, were left baffled when the referee pointed to the penalty spot.

Patton stepped up and slotted the ball home to put the hosts ahead. Whickham made an immediate change with Matty Pattison coming on for McAndrew.

However, the Lang Jacks couldn’t create another opening and were handed their first league defeat of the new season after being edged out at the Daren Persson Stadium.