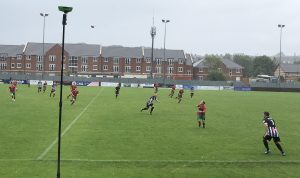 Carl Finnigan and Matty Pattison both scored hat-tricks as Whickham progressed through to the Preliminary Round of the Emirates FA Cup after the record-breaking 10-1 thrashing of Harrogate Railway.

Sam Hedley opened the scoring and Pattison scored his first of the game before the hosts pulled a goal back through James Healey.

Kelvin Thear continued the scoring on 69 minutes, while Finnigan scored his fourth of the afternoon just three minutes later.

Dale Burrell was among the goals on 85 minutes and Pattison wrapped up his hat-trick two minutes later. The Lang Jacks will play host to Thornaby in the next round of the competition.

Assistant Manager Andrew Bulford took charge of the team and made three changes to the side that lost during the week, with Pattison, Kieran Galbraith and Hedley all being named in the starting line-up.

After a bright start to the game, the Lang Jacks broke the deadlock on 13 minutes when a cross-come-shot, from Hedley, floated over the ‘keeper and into the net.

Whickham’s pressure continued and, after Kelvin Thear’s effort went inches wide of the post, they doubled their advantage on 19 minutes.

Finnigan latched on to Hedley’s pass down the left and played a terrific ball into the area, which Pattison took full advantage of and swept home at the back post.

Against the run of play, the Rail pulled a goal back when Healey raced through on goal and dinked the ball over the approaching ‘keeper.

Conor Newton’s rasping drive was tipped around the post by Joe Wilton, but it wasn’t long before the Lang Jacks doubled their advantage again.

Burrell directed his header off the crossbar, but the rebound wasn’t dealt with, which allowed Pattison to sweep home the loose ball.

The former South Africa international had a couple of chances to complete his hat-trick, inside the first 38 minutes of the game, but was denied by Wilton.

Whickham added a fourth goal, four minutes before half-time, when Newton’s cross was guided home by Finnigan, inside the penalty area.

After a dominant first 45 minutes, the Lang Jacks picked up where they left off. Pattison had another two chances to get his third of the afternoon, but struck just off target on both occasions.

Finnigan scored his second and third of the game within the space of three second-half minutes, with Lee McAndrew providing the cross on both occasions.

Kelvin Thear was among the action when he drifted into the box before powering home and Finnigan’s fourth soon followed – just three minutes later.

There was still enough time for Burrell to get his name on the scoresheet, while Pattison wrapped up his hat-trick later in the game as Whickham hit double-figures.