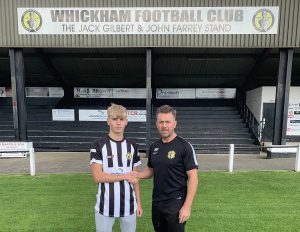 Whickham are delighted to announce the signing of talented young forward Scott Robson.

The 19-year-old spent two years with the Park View Academy, between 2017 and 2019, and also has previous Northern League experience with Chester-le-Street Town.

Robson is a hard-working forward, who can also play out wide. His pace will cause opposition defenders real problems and he is aiming high in his first season with the Lang Jacks.

“I can’t wait to get started with Whickham after the chat with Andrew and Robin,” Robson said. “They made me feel very welcome and I can’t wait to be part of this club moving forward.

“I’m hoping to achieve promotion with Whickham with the club signing some top quality players, which will bring the best out of me.

“I will continue to develop, as a footballer, and hopefully I will kick on a lot this season.”

The Lang Jacks have won two of their first three games this season, including a 10-1 victory in the Emirates FA Cup last Saturday.

Assistant Manager Andrew Bulford spoke about the addition of Robson to the squad and is pleased to have added the youngster, beating other top clubs to his signature.

Bulford said: “It’s great to have Scott on board and it’s credit to how the club is progressing to secure the signing ahead of other Northern League clubs.

“Scott will bring another dimension to the already exciting attacking line. He has pace to burn, but, more importantly, he’s got a good, hard-working, mentality, which is very important if you want to play for Whickham.

“It’s a great signing and Scott already has Northern League experience, which I’m sure will help him fit straight in.”