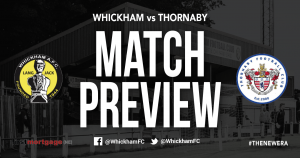 After a record-breaking afternoon in the Emirates FA Cup, Whickham will play host to Thornaby in their first home game of the season on Wednesday evening.

Carl Finnigan and Matty Pattison both scored hat-trick as the Lang Jacks demolished Harrogate Railway 10-1, the biggest win in the competition in history for Whickham.

Robin Falcus’ side have started with a win and a loss in Division One this season and will be hoping to make a winning start to their home campaign, against Thornaby.

The two sides faced each other three times in the 2017-18 season. Whickham won 3-2 in the Northern League Cup and also 2-1 in the home league fixture, while Thornaby ran out 5-0 winners in the away fixture.

Thornaby were given a harsh welcome to Division One on the opening day of the 2019-20 season as they conceded eight goals away to Shildon.

However, the Blues responded well in their next match by beating Bishop Auckland 2-0 to progress through to the Preliminary Round of the FA Cup.

Last season, Thornaby missed out on the Division Two title on the last day of the season, but their second-placed finish meant they secured promotion.

Midfielder Matty Pattison said: “The lads have shown a better mentality this season. I think we  are together more as a group and having pre-season together with all the lads has done us the world of good.

“Going into the game on Wednesday, the lads will be full of confidence, which we should be. As long as we put in a performance, where we work hard and we put the graft in, then I’m sure our quality will shine through.

“It’s a good chance for us to see them (Thornaby) for that game in the FA Cup too.”

Kick-off at The First Mortgage Glebe is at 7:30pm and admission is £6 for Adults, £4 for Concessions and Under-16s get in free with a paying adult.

Also, Issue 1 of our matchday programme will be on sale as you enter the ground, priced at £1.50 for 40-pages of exclusive content. 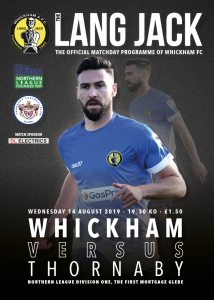 Issue 1 of The Lang Jack