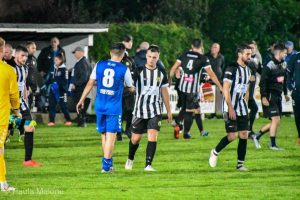 Youngster Scott Robson scored seven minutes into his debut as Whickham beat Thornaby 2-0 in their first home game of the season.

After a goalless first-half, it took the hosts just 58 seconds of the second-half to break the deadlock through Matty Pattison.

The Lang Jacks continued to control the game and doubled their advantage on 77 minutes through Robson, who took the ball around the ‘keeper before slotting home.

Whickham were relatively untroubled throughout the game and saw the remaining minutes out for an important three points.

Manager Robin Falcus made two changes to the team that won 10-1 at Harrogate Railway in the Emirates FA Cup, with Chad Collins and Clark Kay replacing Kelvin Thear and Sam Hedley respectively.

After a fairly quiet start to the game at The First Mortgage Glebe, it was the hosts that started to get a foothold and created a few openings.

Matty Pattison slipped a pass to Chad Collins, who turned and struck just wide of the post on 18 minutes.

Dale Burrell went close minutes later before Pattison drew an excellent save from James Dawson, who pushed the free-kick behind for a corner.

Thornaby’s first chance of the game fell on 33 minutes when they were awarded a free-kick on the edge of the penalty area.

Joe Scaife-Wheatley stepped up and curled his effort over the wall and inches over the crossbar.

A couple more chances were created from the home side, but it remained goalless going into half-time.

Whatever was said to the hosts at the break certainly worked as they took the lead just 58 seconds into the second-half.

Lee McAndrew’s cross was headed down by Burrell and Pattison was on hand to rifle the ball home from inside the penalty area.

The midfielder was denied a second goal by the woodwork as his in-swinging corner, on 49 minutes, rattled the top of the crossbar.

Whickham remained in control of the match and young forward Robson was brought on in the 70th-minute in place of Pattison.

His debut couldn’t have started much better really. Kieran Galbraith’s long ball over the top was latched upon by the forward, who took the ball around the approaching ‘keeper before finding the net.

Striker Carl Finnigan went extremely close with a spectacular effort late in the game. The hosts saw the game through for their second win of the season and their first at home.