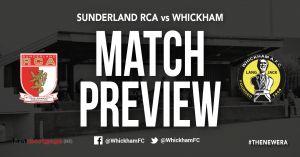 Whickham have a huge week ahead of them, three games in the space of seven days, and it all begins with a trip to face Sunderland RCA.

The Lang Jacks made it back-to-back wins after a comprehensive victory over Thornaby, which was their first home game of the season.

RCA done the double over Whickham last season, winning 3-0 at The First Mortgage Glebe before edging out 1-0 winners back in March.

The two sides have started their league campaign with two wins apiece, Whickham losing one game, and it should be an entertaining match at Sunderland LGV Park.

RCA have started the season with two victories in the league and, during the week, they edged out Ryhope CW in the Emirates FA Cup.

Stephen Callen scored both goals, including the late winner, as RCA progressed through to the Preliminary Round – after the two sides initially drew 0-0 in the tie at Sunderland LGV Park.

In the league, RCA started with a 2-1 victory at home to North Shields and recorded their second win, in as many days, when they beat Guisborough Town by the same scoreline.

RCA finished fifth in Division One last season, just five points off Hebburn Town in second place, and will be looking to follow on from that this campaign.

Manager Robin Falcus said: “If we stick together, like we have done in the four games up till now, I think it’ll be a very close game.

“They’ve got that experience of being together in the Northern League for years and years and they’re well-established.

“It’s a massive test for us, away from home again. We will re-organise and tell the lads what we want out of them, keep reminding them what we want and what our shape is.

“It’s a 50/50 game. They’ll be favourites at home, but we’ve confidence, we’ve got togetherness, which has shown in the first four games. That’s all we ask for.”