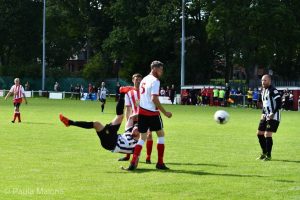 Lee McAndrew’s late winner fired Whickham up to second in the league after they produced a late comeback to edge out 2-1 winners against Sunderland RCA.

The Lang Jacks closed out the first-half on top and were denied by the woodwork when Kevin Thear’s strike was tipped onto the crossbar.

RCA took the lead through a Stephen Callen header, but the Lang Jacks went in search of an equaliser and Carl Finnigan hit the bar on 75 minutes.

Youngster Scott Robson made an immediate impact after coming on, for the second consecutive game, when he fired into the bottom corner on 82 minutes.

The visitors found themselves ahead just three minutes later when Matty Pattison’s cross was flicked on by McAndrew into the far corner of the net.

It was a nervous final few minutes, but the Lang Jacks negotiated them well to pick up a valuable three points.

Manager Robin Falcus made two changes to the side that beat Thornaby during the week, with Andrew Bulford and Kelvin Thear coming into the starting line-up in place of top-scorer Finnigan and Chad Collins respectively.

The first opening of the game fell RCA’s wasy with forward Mark Davison curling a free-kick over the wall and straight at Adam Bartlett.

Pattison was denied by a terrific save from Robbie Dean as the midfielder’s strike was pushed around the post from the ‘keeper.

Dylan Elliott went close on two occasions before the half-hour mark, but there still wasn’t much separating the teams during a tight contest at Sunderland LGV Park.

Davison was denied again by Bartlett on 36 minutes, however, it was the visitors that closed out the first-half on top.

Dale Burrell’s overhead-kick went just wide of the post before Kelvin Thear’s rasping drive was superbly tipped onto the crossbar by Dean.

Burrell’s header was nodded over by an RCA player before Clark Kay’s low effort went wide and that was the last action of a goalless first-half.

The hosts should’ve been a goal up, six minutes into the second-half. Callen’s low cross was, remarkably, turned onto the crossbar by Davison, who was only a yard out.

RCA made up for the missed chance a minute later though when a corner was headed home by Callen at the back post.

The visitors thought they should’ve been awarded a penalty on 58 minutes when Pattison knocked the ball past the defender and was bundled over – nothing was given.

Just after the hour mark, the home side were denied a second goal. Davison helped the ball back to an unmarked Callen, who curled around a host of bodies, but was denied by Bartlett.

The visitors went in search of an equaliser, but were denied again by the woodwork, for the second time, on 75 minutes.

Clark Kay’s cross from the left was glanced on in the six-yard box by Finnigan, but the ‘keeper reacted well to push the effort on to the bar before RCA cleared their lines.

The Lang Jacks drew level on 82 minutes though when Pattison helped Kay’s cross to Robson, who had the ball at his feet in the area and struck across goal and into the bottom corner.

Three minutes later, the comeback was complete as Pattison’s cross was flicked on by McAndrew and the ball nestled into the far corner of the net.

Ryan Leonard’s strike, deep into stoppage time, was glanced over the bar by his own teammate and the full-time whistle went soon after as Whickham secured all three points.