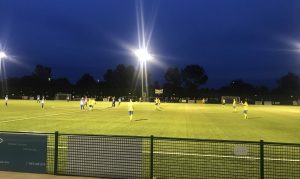 Whickham slipped to their second league defeat of the season as Stockton Town ran out 2-0 winners at the Coverall Stadium.

It was a positive start to the game from the hosts, but they found themselves behind on 27 minutes when the hosts were awarded a penalty.

Stephen Little tripped Jamie Owens up in the area and the striker stepped up and rifled the ball under the diving ‘keeper.

Right on the stroke of half-time, the Anchors doubled their lead when James Risbrough’s low cross was tapped home by Kevin Hayes.

Both sides had openings in the second 45 minutes, but the scoreline remained the same and Whickham’s attention will now quickly turn to the FA Cup clash with Thornaby in under 48 hours.

The Lang Jacks came into the game off the back of a fantastic 2-1 victory away to Sunderland RCA at the weekend and had won their previous three matches.

It was indeed the visitors that created the first chance of the game, on eight minutes, when Max Cowburn’s first-time effort whistled inches over the bar.

Whickham should have gone ahead on 24 minutes, but a fantastic save denied them. Scott Robson’s pass was helped on by Andrew Bulford to Kelvin Thear, who was denied by the Stockton ‘keeper.

The hosts had the perfect opportunity to go ahead in the game, just three minutes later, when Owens knocked the ball past Little, who fouled the striker in the area.

Owens wasn’t to be denied the chance to take the penalty and he made no mistake from the spot, firing home, under Adam Bartlett.

The goal knocked the wind out of Whickham’s sails and the hosts found themselves on top for the rest of the first-half.

Risbrough, Hayes and Fred Woodhouse all had chances before the Anchors scored a second goal, on 44 minutes.

A through ball released Risbrough, who raced through and played the ball across the six-yard box to Hayes, who found the bottom corner.

Bartlett made a great save to keep out Woodhouse’s effort, but the hosts had their head in their hands, just two minutes later, when they should’ve added a third goal.

Owens skipped past the challenge of Little and drilled a low cross to the back post, but the unmarked Woodhouse, somehow, missed the target from close range.

The hosts continued to create openings and Risbrough was, once again, denied by a fantastic save from Bartlett, this time on 71 minutes.

The pacey winger was played through on 76 minutes, but, again, Bartlett was quick off his line and produced another tremendous save to keep out Risbrough.

Cowburn and Robson went close for the visitors around the 80-minutes mark, while the former drew a great save from the ‘keeper from a free-kick.

The visitors were unable to take anything from the game, but have under 48 hours rest before their FA Cup game with Thornaby at The First Mortgage Glebe.