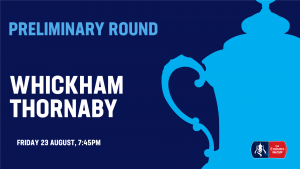 Whickham go into this huge Emirates FA Cup clash with Thornaby having played only 48 hours prior to the game.

The Preliminary Round match with the Blues will be the second time the sides have faced this season, with the last meeting occurring just nine days ago.

In their first home match of the season, the Lang Jacks produced a very professional display as they won 2-0 thanks to second-half goals from Matty Pattison and Scott Robson.

Whickham’s three-game winning streak was brought to an end on Wednesday evening after a 2-0 defeat to Stockton Town. They’ll be hoping to bounce back straight away and put their name in the draw for the First Qualifying Round.

A familiar opposition for the Lang Jacks, who got the better of Thornaby just over a week ago at The First Mortgage Glebe.

After the defeat to Whickham, two days later, the Blues bounced back to claim a 1-1 draw away to Consett.

Their first home game of the season followed on Tuesday evening, but a late goal from Newton Aycliffe striker Dean Thexton snatched all three points for the visitors.

Thornaby currently sit bottom of the Northern League Division One table, but form goes out the window in cup games and they’ll provide another stern test for the Lang Jacks.

Manager Robin Falcus said: “We’ve had just 48 hours rest for the big game, but we’ve just got to make sure the lads are as fresh as they can be. It’ll be a massive test for us again.

“Thornaby, when we played them last week, were full of energy, full of spirit and determination and they put the ball in the right areas, so we will have to be fully concentrated for this game.

“It’s probably an advantage to be honest (that we’ve played them already). We know what to expect from them. I don’t think they’ll change anything in terms of what they’ve got.

“We will definitely be better than what we were on Wednesday night. There’s one or two to come back in, who’ll make a difference for us. It’ll also be an advantage that we’re at home.”

Issue 2 of our matchday programme will be on sale as you enter the ground, priced at £1.50 for 40-pages of exclusive content. 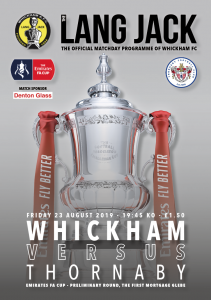 Issue 3 of The Lang Jack