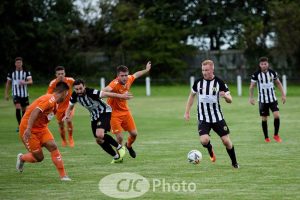 Ten-man Whickham were knocked out of the Emirates FA Cup after a 2-1 defeat to Thornaby in the Preliminary Round of the competition.

The hosts made the perfect start to the game when an exquisite turn and finish from Matty Pattison fired them ahead inside four minutes.

Whickham were the better team for the first half-hour, but found themselves a man down when Kelvin Thear was harshly sent off for a strong challenge.

Just 10 minutes later, Thornaby made their man advantage count when they drew level through Lewis Green.

Joe Scaife-Wheatley hit the bar for the visitors, who took the lead through Green on 54 minutes.

With time running out, Whickham were awarded a penalty when Matty Grieve was fouled in the area. Carl Finnigan’s spot-kick was saved and the visitors saw the rest of the game out to progress through in the competition.

Manager Robin Falcus made a number of changes to the side that lost during the week to Stockton Town, with top-scorer Finnigan being one of the players coming back into the starting line-up.

Liam Cooke flashes an effort across goal and wide in the third minute, but the hosts went ahead with their first chance of the game, a minute later.

Finnigan played a pass inside, which was controlled brilliantly on the turn by Pattison, who found the bottom corner to put the Lang Jacks ahead.

Dale Burrell was denied by the Thornaby ‘keeper before Cooke’s free-kick was easily gathered at the other end by Adam Bartlett.

Some intricate passing on 26 minutes saw the hosts break quickly. Conor Newton found Finnigan, who handed it off to Pattison before the midfielder’s shot was saved by James Dawson.

The game was turned on its head on 31 minutes. Thear closed the full-back down and, following a strong challenge from the winger, the referee sprinted across and, harshly, dismissed the Whickham man.

Thornaby, with a man advantage, started to grow more into the game and after Green was denied by Bartlett, he equalised on 41 minutes.

A terrific swinging cross by Jordan Wilson was steered home by the advancing Green at the back post.

The sides went in level at the break and the hosts needed to regroup after the loss of Thear, which meant they would play the best part of an hour with 10-men.

Thornaby went close to going ahead, two minutes after the restart, when Scaife-Wheatley’s piledriver was tipped on to the crossbar by Bartlett.

The visitors continued to press on the front foot and took the lead on 54 minutes. A cross from the right made its way to the back post.

Green was looking to play the ball back across the face of goal, but his header lofted over Bartlett at the near post and found the far corner of the net.

Thornaby threatened to extend their lead further, around the hour mark, when Ben Jackson was denied twice by Bartlett.

Whickham broke to the other end, Finnigan’s low strike was pushed behind for a corner, which was delivered into the box, half-cleared, and the striker fired a rebound inches over the bar.

Scott Robson was brought on in place of Lee McAndrew and the hosts went close five minutes later when Burrell guided a head over the bar.

With time not on Whickham’s side, a terrible challenge on Matthew Grieve, in the penalty area, was spotted by the official, who made no mistake in pointing to the spot.

This was the home sides chance to level the game, with just nine minutes remaining. Finnigan stepped up and his penalty was saved by the ‘keeper, who was a good few yards off his line.

There was enough time for one more chance. However, Robson’s bullet header was tipped away by Dawson in the Thornaby goal.

Whickham haven’t reached the First Qualifying Round of the FA Cup since 2014 and their wait continues after they were edged out Thornaby.