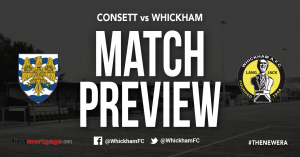 It was a disappointing week for the Lang Jacks, last week, as they suffered two defeats, including the one to Thornaby in the Emirates FA Cup.

Whickham go in to the game against Consett having won three of their last five games, while they’ve also conceded just four goals in five league games and have kept two clean-sheets.

The game at Belle Vue Stadium marks the end of a busy first month for the Lang Jacks, where they will have played eight matches.

Consett started the season with back-to-back wins over Northallerton Town – a 1-0 win at home – and they edged out 3-2 winners at Newcastle Benfield.

However, they are winless in their last five games and have picked up two points from a possible nine recently.

The 1-1 draw at home to Thornaby was followed up by a 2-1 defeat, away to Ryhope CW. Their last match was also a 1-1 draw, this time against Whitley Bay, where Calvin Smith scored an equaliser in the second-half to pick up a point.

Former captain Danny Craggs departed for Division One rivals in the summer, while the Steelmen have recently announced the signing of forward Dale Pearson from Blyth Spartans.

Manager Robin Falcus said: “We’ve got to move on as quick as possible (after the FA Cup defeat) and that’s what I told them (the squad).

“Reality is, how fare are you going to go in that competition? It’s nice because of the attention that you get the club and everything else, but it’s back to the grind now.

“We’re back to the league and it’s going to be a tough game against Consett. Games come thick and fast and we’ve just got to get that disappointment behind us as quick as we can.

“It will have been in their minds all weekend, but we’ve got to get it out of them. I’ve told them that the quicker it’s out of them, the better.”