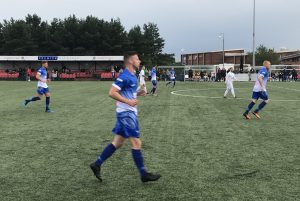 Whickham suffered their third-consecutive defeat as they were blown away by a ruthless Consett side, who ran out 5-0 winners at Belle Vue Stadium.

The Lang Jacks had the chance to go ahead after being awarded a penalty following a foul on Scott Robson, but Carl Finnigan placed the spot-kick wide of the post.

It’s safe to say that the hosts never looked back from there.

Consett went straight to the other end and went ahead through Andrei-Vasile Ardelean before Jake Stafford doubled their lead three minutes later.

Calvin Smith and Jermaine Metz inflicted more misery after the hour-mark, while Ardelean’s second of the game, late on, capped off an impressive night for the home side.

Not many sides would’ve been able to deal with a Consett side in that sort of form, but the Lang Jacks need to put the defeat behind them as they are in FA Vase action on Sunday afternoon.

From the outset, the hosts showed their attacking intent as Ardelean was denied by the legs of Adam Bartlett in the opening exchanges before the striker hit the crossbar on 13 minutes.

Whickham were forced into making an early substitution when Matthew Grieve come off with an injury, with the defender being replaced by Stephen Little.

The Lang Jacks had their first opening of the game when Finnigan tried his luck from distance, spotting the ‘keeper off his line, but fired wide of the target.

Consett thought they had the lead on 35 minutes when Luke Carr’s brilliant cross was headed home by Ross Wilkinson at the back post, but the goal was ruled out for an offside.

Ardelean was denied by Bartlett a minute later, but it was the visitors, who soon found themselves with a perfect chance to go ahead.

Robson drove into the Consett box and was bundled over by Darren Holden. Finnigan stepped up, but placed the penalty wide of the post.

The hosts went straight to the other end of the pitch and went ahead when Holden’s cross was slotted home by Ardelean.

It wasn’t long before the Steelmen had a second goal to their name. Matty Socombe threaded a pass through the Whickham back line and Stafford done the rest, finding the back of the net.

Consett come out firing in the second-half, picking up where they left off. Ardelean and Carr were both denied by Bartlett before Slocombe fired over the bar from close range.

Robson tested goalkeeper Kyle Hayes on the hour-mark, but the home side scored a third goal just under a minute later.

A through ball released Smith, who shrugged off his marker with ease before curling across goal and into the top corner.

Finnigan and Tom Howard both went close for the visitors in quick success, but the hosts, with every attack, looked likely to score.

They did just that, for the fourth time, on 67 minutes. Dale Pearson flicked the ball over his head to release Metz, who raced through before striking across and into the bottom corner.

The Lang Jacks were denied by a fantastic save, soon after the restart. Dale Burrell’s effort looked to be heading into the top corner, but Hayes was equal to it and tipped the ball around the post.

It went from bad to worse as the hosts scored a fifth on 82 minutes. Substitute Ali Alshabeeb made an instant impact when his cross was tapped home by Ardelean.

Whickham had a couple of chances in the final few minutes of the game, to get a consolation. Firstly, a mistake at the back saw the ball ricochet off the defender and to the feet of Finnigan.

The striker, who was inside the penalty area, saw his shot saved by the approaching ‘keeper, who also kept out Matty Pattison’s long-range effort.

Whickham had only conceded four goals prior to the game, but manager Robin Falcus will be looking for a response when they welcome Squires Gate to The First Mortgage Glebe on Sunday.