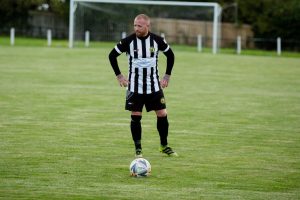 Whickham crashed out of the Buildbase FA Vase after a 2-1 defeat in extra-time to Squires Gate at The First Mortgage Glebe.

The hosts went ahead in the game when Carl Finnigan turned home Lee McAndrew’s cross on 36 minutes.

Finnigan headed Max Cowburn’s cross off the crossbar at the start of the second-half, but other missed chances proved costly for the Lang Jacks.

The visitors levelled in injury time, when James Boyd rifled the ball into the roof of the net, which saw saw the game head in to extra-time.

Finnigan had a goal ruled out for offside, a very close call, in the first period of extra-time, but, after Dean Ing hit the post, the striker put Gate ahead on 109 minutes.

The road to Wembley ended at the first hurdle for the Lang Jacks, who will need to pick themselves up as they play host to Shildon on Wednesday evening.

Robin Falcus’ side were going in to the game off the back of three consecutive defeats, but neither side managed to really find their feet in the opening exchanges.

The first real chance was for the visitors on 26 minutes when Jacob Higham struck wide of the target from the edge of the area.

Boyd and Matty Pattison exchanged chances before the hosts broke the deadlock on 36 minutes. A long clearance bounced over the head of the full-back and allowed Lee McAndrew to race down the left flank.

The winger played a terrific cross in to the near post and Finnigan steered the ball home to put the Lang Jacks ahead.

Whickham had the lead at the break, they certainly had the most possession, but there wasn’t much between the teams in the first 45 minutes.

Eight minutes into the second-half, the hosts were denied by the crossbar when Cowburn’s cross was headed back across goal by Finnigan and on to the woodwork.

Just after the hour mark, both sides had great openings. Firstly, a through ball released Boyd, who broke into the box before striking across and just wide of the far post.

Two minutes later, Pattison picked up the ball around 25-yards out and his effort was watched over the bar by the ‘keeper

Gate continued to threaten as the minutes started to tick away, Ing going close on 70 minutes was another warning sign that they weren’t going down without a fight.

Finnigan and McAndrew both has efforts within quick succession, but both went agonisingly wide of the post.

Lewis Gibbons was on hand to clear an effort off the line on 85 minutes, but Gate drew level in the first minute of additional time when Boyd rifled into the roof the net.

There was time for one more effort in normal time, but McAndrew’s cross was headed wide by the diving Scott Robson.

Adam Bartlett was on hand to keep the scores level on 97 minutes when he produced a fantastic save to deny Josh Pollard at the near post.

The hosts went straight to the other end and, this time, Robson’s curling effort was pushed around the post by Ben Fletcher.

Whickham thought they’d restored their lead on 102 minutes. McAndrew swung a cross to the back post and Finnigan turned the ball home, but the linesman had his flag up and the goal was ruled out for offside.

Just 15 seconds into the second period of extra-time, Gate were inches away from taking the lead when Ing’s shot cannoned off the post.

Three minutes later though, the visitors took the lead and it was Ing, who found the back of the net. In search of an equaliser, the Lang Jacks brought on Andrew Bulford.

The former FA Vase winner almost made an immediate impact when his free-kick was plucked out of the top corner by Fletcher. Bulford was also denied a minute later when his effort, which this time had the ‘keeper beaten, was cleared off the line by Josh Westwood.

Bartlett denied Ing twice from close range, a fantastic piece of goalkeeping, but the hosts couldn’t find an equaliser and were knocked out of the FA Vase.