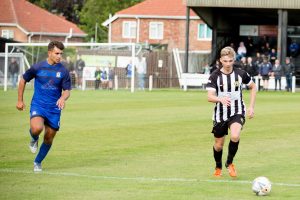 Whickham are pleased to announce the signing of young defender Charlie Exley.

The full-back joins the club after moving back to the region after spending time playing in Scotland with Gretna FC 2008 and Queen of the South.

Exley played the full 120 minutes of the defeat to Squires Gate in the FA Vase and spoke after the game about signing for the club.

“It’s a very good standard in the Northern League,” he said. “Quite a few of my friends play at this level and they recommended it.

“Whickham have built a good squad and I know quite a few of the players already and I was just happy to get the opportunity to come and sign for the club.”

Exley continued: “Everyone wants to have a good season. Because everyone is new, everyone is getting to know each other and we all just want to progress as a team, especially with the blend of youth and experienced lads.”