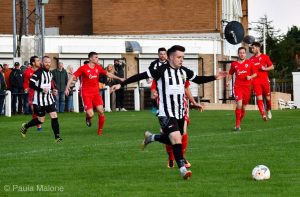 Scott Robson’s first-half strike was cancelled out in the final seconds of the game as Whickham were held to a 1-1 draw with Shildon.

The Lang Jacks were the better team in the first-half and broke the deadlock right on the stroke of half-time when Robson scored a beauty.

After leading at the break, Shildon got back into the game and Whickham were made to work hard defensively, but that they did.

The hosts were seconds away from claiming all three points, but Ben Trotter’s goal in the 93rd-minute levelled the game and left Whickham on their knees in disbelief.

It was one of the performances of the season so far and the Lang Jacks can take plenty of positives going into the game against West Auckland Town on Saturday.

Robin Falcus made four changes to the team that lost to Squires Gate, with new signing Liam Connell, Stephen Little, Tom Scothern and Scott Robson all coming into the starting line-up.

Both sides settled into the game rather quickly and the first opening was when the visitors went close through Kurt Matthews.

Whickham also threatened to break the deadlock early on when Robson latched onto a through ball, but stroked the ball across goal and inches wide of the post.

The Lang Jacks, who were going into the game off the back of four consecutive defeats, had a couple of chances within quick succession – on 14 and 16 minutes.

Dale Burrell’s half-volley went over the bar, while Robson and Max Cowburn’s efforts were blocked bravely near the goal-line by the visitors.

Connell, who has just signed on loan from South Shields, was called into action for the first time on 21 minutes, but the shot-stopper easily gathered Billy Greulich-Smith’s header.

Burrell drew an excellent save from Shaun Newbrook a minute later, while the hosts continued to press for an opening goal and went close through Scothern and then Cowburn.

The momentum was with the hosts and a goal was looking more and more likely as half-time loomed. Whickham managed to go ahead a minute before the break.

Out on the left side, the ball broke out to Robson, who gathered the ball before curling delightfully across and into the far corner of the net – from outside of the area on the left.

It was nothing more than the Lang Jacks deserved though, they were, by far, the better team during the first 45 minutes.

The hosts would’ve expected a reaction from Shildon, who done just that in the second-half. Greulich-Smith was proving to be a real a handful up top and was denied by Connell at his near post.

Despite seeing more of the possession, the visitors didn’t really threaten much and the hosts should’ve doubled their lead on 67 minutes.

Robson’s pass was helped on by Matty Pattison to Scothern, whose effort, from inside the area, was palmed away by Newbrook.

Whickham were defending well and negotiated 90 minutes with ease and the game headed into injury time. Greulich-Smith headed a great opportunity wide in the 91st-minute.

Two minutes later though, the Railwaymen delivered a blow as they found an equaliser in the dying seconds of the game. A scuffed effort from Trotter found the back of the net and the visitors were elated to take home a point.