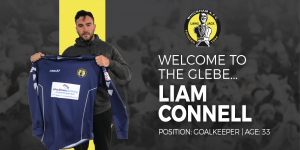 Whickham are delighted to announce the signing of goalkeeper Liam Connell on a one-month loan from South Shields.

Connell is a two-time FA Vase winner and during his three-years with the Mariners, he has won two promotions and five trophies.

The 33-year-old, prior to joining Graham Fenton and Lee Picton’s side in 2016, spent seven years with neighbours Dunston UTS.

In 2012, Connell was part of the Dunston team, alongside Andrew Bulford and Lee McAndrew, who won the FA Vase at Wembley and said that it was a “no-brainer” to come on loan at Whickham.

“I started off well in pre-season with (South) Shields, but haven’t been selected, so I spoke to the management and told them that I wanted to go out on loan.

“In the meantime, I’ve spoken to Robin and I know a lot of the lads here already. I know what the set-up  is like and how Robin likes to play football, so it was a no-brainer to sign.”

On what he’s hoping to gain from the loan, he added: “Game time for starters. I haven’t played this season, so the most important thing is to get some games in.

“As well as that, I’m hoping we win as many games as we can.”

Across two spells with the Mariners, Connell had made 140 appearances and has kept 56 clean-sheets.

The highly-rated shot-stopper made history with South Shields in the 2016-17 season, when they won four trophies – Northern League Division One title, FA Vase, Durham Challenge Cup and Northern League Cup.

Adam Bartlett, who signed for the Lang Jacks in the summer, has joined Newcastle United as the Head of Academy Goalkeeping and Manager Robin Falcus spoke about his delight to have signed Connell on loan.

“I’d like to thank South Shields for helping us get this pushed through,” he said. “Although it’s only a loan deal, we were desperate for it to happen.

“We couldn’t have a better replacement for Adam Bartlett. Liam and Barts are probably the two best goalkeepers in the area.

“Liam has loads of experience and knows the club. He’s a local lad and he knows a lot of the players. He won’t have any problems fitting in.

“With it just being a months loan, it gives us a chance to work on bringing someone in. Hopefully, Liam may agree to a permanent deal, we haven’t really spoken about that.”

Connell will go straight into the matchday squad for the home game against Shildon.