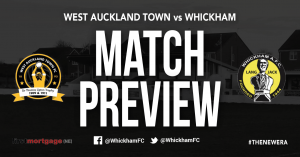 Whickham ended their streak of four-consecutive defeats when they picked up a point against Shildon on Wednesday evening.

The draw really didn’t reflect the performance and the story of the game at all though, with the Lang Jacks dominating large spells, but conceded a 93rd-minute equaliser.

A lot of positive will be taken from the game, going in to another tough test on Saturday afternoon, as the Lang Jacks travel to face West Auckland Town.

In the same fixture last season, the sides played out a seven-goal thriller, with West winning 4-3. They completed the league double in March, winning 4-1 at The Glebe.

There’s no denying that West have talent all across the pitch, but they’ve started the new season with just one win in eight league games.

The first victory of the same was earned last weekend when they beat neighbours Bishop Auckland 2-1, with West coming from behind to pick up the three points.

Strikers Nathan Fisher, formerly of Spennymoor Town, Darlington and Gateshead, Adam Burnicle and Amar Purewal form a pretty formidable front line and will be the ones to watch.

Manager Robin Falcus said: “I’ve said to the lads that a lot of teams have had a bit of an indifferent start, they’re up and down lately.

“There’s been a few funny results. Everybody is taking points off each other, can we go there and put a performance in like we did against Shildon? With a lot of energy and youth.

“We’ve got a good energy about us and if we can play like we did on Wednesday, and bring one or two back in, then it’s going to make us better.”