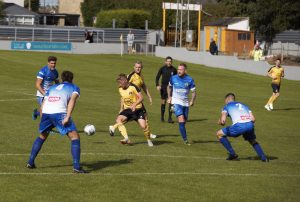 Whickham are now six games without a win after a disappointing 3-0 defeat away to West Auckland Town.

Amar Purewal broke the deadlock for West on 18 minutes and their lead was doubled, just before half-time when Adam Mitchell fired home from the edge of the area.

Carl Finnigan and Matty Pattison had chances in the second-half to pull a goal back, but the game was put to bed in the 89th-minute.

Rees Greenwood’s shot took a huge deflection and found the back of the net. The Lang Jacks were also reduced to 10-men when Pattison was shown a straight red card late on.

It was a game of very few clear-cut chances, but Whickham will be looking to put the defeat behind them as they take on Bishop Auckland in the Northern League Cup on Wednesday evening.

Manager Robin Falcus made three changes to the team that drew with Shildon midweek, with Sam Hedley, Lee McAndrew and Ross Peareth coming into the starting line-up.

The first chance of the game fell Whickham’s way when Pattison swung a corner to the back post and defender Kieran Galbraith headed down and narrowly wide at the back post.

West went close to opening the scoring on eight minutes when Mitchell’s free-kick was guided over the crossbar by Chris Hunter, who was around 10-yards out.

The deadlock was broken by the hosts on 18 minutes. A huge hint of offside when the ball was played through to Purewal saw the Whickham back line stop.

Nevertheless, the striker continued through on goal and tucked the ball into the bottom corner to put his side ahead.

Liam Connell denied Purewal his second of the game on 24 minutes, while Hunter headed off target two minutes later.

Whickham had a great chance to pull back level on 27 minutes. A through ball released Scott Robson, who burst through before being denied by the legs of Tom Flynn.

Robson’s first-time strike, on 42 minutes, had the ‘keeper beaten this time, but evaded the crossbar by just a few inches.

With their next attack though, West doubled their advantage. Flynn’s goal-kick caused the back line problems before Mitchell volleyed into the bottom corner.

The hosts were lucky to have 11-men still on the pitch, on 65 minutes. A very late challenge on Peareth left the Whickham captain on the floor, which had the visitors up in arms.

From that free-kick, Galbraith played a delightful ball into the penalty area and Finnigan drew an excellent save from Flynn, who plucked the ball out of the top corner.

The chances were few and far between in the second-half. Substitute Andrew Bulford headed off-target, while Pattison curled a free-kick over the bar in the final stages of the game.

West should’ve put the game to bed through Purewal and David Dowson, but both players failed to take their chances.

The points were wrapped up soon after though when former Sunderland youngster Greenwood’s effort took a huge deflection, leaving the ‘keeper rooted to the spot, and found the back of the net.

There was enough time for one more talking point from the game as Pattison was shown a red card in the second minute of additional time.