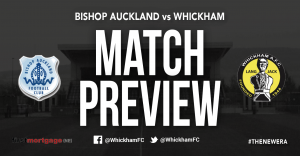 Whickham are on their travels once again as they take on Bishop Auckland at Heritage Park in the first game of the Northern League Cup group stage.

The League Cup has a different format this year, with there now being a group stage, consisting of four games, with the top two going through to the Last 16 of the competition.

The Lang Jacks go into tonight’s clash having not won a game in their last six, in all competition, after the defeat to West Auckland Town at the weekend.

Bishops are also in a run of poor form at the moment, with them going into the League Cup match off the back of three consecutive defeats.

After the defeat to neighbours West Auckland, they have conceded nine goals in their last two matches. They were beaten 4-1 away to Billingham Town before losing 5-1 to Shildon, at home, just four days ago.

Defender Stephen Little said: “I’m not bothered about any team. When we’re on it, we’re a game for anybody. I’d like to think the team would be similar.

“Robin might have to make changes, there’s people away still and maybe there’ll be knocks. I think Robin, Bully, Jordan and Willa will go with a solid team.

“This is one of the last competitions that we’re involved in, alongside the Durham Challenge Cup. We’ve got to go for it.”