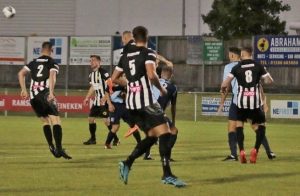 The hosts went ahead after just two minutes when Jackson Ward pounced on a mistake at the back before striking home.

Whickham responded well and equalised 10 minutes after half-time through a wonder strike from Dale Burrell, who scored from inside his own half.

Carl Finnigan was shown a straight red card on 64 minutes, but this didn’t impact the visitors at all though as they were on top for the rest of the game.

Scott Robson won a free-kick, out on the right side, deep in stoppage time. Kay’s cross made its way across the face of goal and found the bottom corner.

The victory brings to an end the six-game winless run and the Lang Jacks have picked up their first points in Group G – with the cup competition having a new format this season.

Manager Robin Falcus made five changes to the side that lost to West Auckland Town at the weekend and the Lang Jacks found themselves behind early in the game.

A cross from the right was misjudged by Kieran Galbraith, which allowed Ward to pounce on the ball before finding the back of the net.

Whickham’s first chance came on six minutes when Finnigan helped the ball back to Lee McAndrew, who fired across goal and wide of the far post.

With just 16 minutes on the clock, the Lang Jacks were handed a major set-back as Conor Newton had to be helped off the pitch due to an injury.

Burrell was next to go close, but the visitors were fortunate not to be two goals down on 20 minutes. Galbraith’s loose pass was intercepted, but Liam Connell was on hand to keep out the resulting effort.

Burrell’s rasping drive on 40 minutes was palmed by the ‘keeper, who managed to react quickly to push the ball away from the poaching Finnigan, who was ready to pounce on the ball.

Whickham were up in arms a minute later when a handball, from a Bishops player, in the penalty area wasn’t given by the match official.

Nevertheless, the visitors came out with intent in the second-half and, 10 minutes after half-time, they levelled through a truly magnificent strike.

Think David Beckham against Wimbledon and Wayne Rooney against West Ham United, the goal is one you really need to watch back.

Finnigan won the ball back near the halfway line before Burrell, who spotted the ‘keeper off his line, hit the cleanest of strikes you’ll ever see, from inside his own half. The ball sailed over the head of the ‘keeper and into the net.

Whickham found themselves down to 10-men on 64 minutes. A bad tackle saw players come together near the halfway line. Finnigan went chest-to-chest with the opposing player, but the theatrical reaction saw the striker receive his marching orders.

Despite having to play the rest of the game with a man down, Whickham were, by far, the better team and went in search of a winning goal.

Robson and Chad Collins went close with about 15 minutes to go before the latter drew a good save from Nick Liversedge, from the edge of the area.

Time was ticking away at Heritage Park. With the game now into the fourth minute of additional time, Robson drew a foul on the right touchline to give the visitors one final chance.

The Lang Jacks took full advantage of this opportunity as substitute Kay swung a cross into the box, which bounced dangerously in the six-yard box before finding the far corner of the net.

Whickham saw out the rest of the game to get their group stage up-and-running with a win. Falcus’ side aren’t in action this weekend, but travel to Silksworth CW in the Durham Challenge Cup next Wednesday.