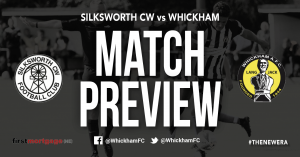 Whickham didn’t have a game at the weekend, but return to action when they take on Silksworth CW in the Durham Challenge Cup Preliminary Round.

After their early exit from both national competitions, the Lang Jacks will be aiming to have a good run both in the DCC and also the Northern League Cup.

Manager Robin Falcus takes his side to Silksworth Welfare Park off the back of a 2-1 win over Bishop Auckland in the League Cup and the team will be full of confidence going into the match.

After a fifth-placed finish in the Wearside League First Division last season, Silksworth have started this season in good form.

Will Crew and Michael Curtis’ side have won six of their 10 league games so far, including two victories in their last five matches.

They go into the game with the Lang Jacks having lost their last two games, against Wolviston and Windscale.