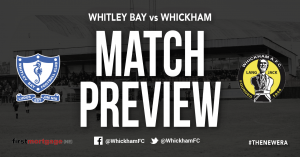 It’s been two weeks since their last league match, but Whickham return to Division One action when they take on Whitley Bay at Hillheads Park.

The Lang Jacks go into the game off the back of two consecutive victories, but haven’t won a league match since mid-August – a 2-1 win away to Sunderland RCA.

Manager Robin Falcus and the team are full of confidence after their 5-0 victory against Silksworth CW through the week, but also from the 2-1 win at Bishop Auckland.

Whickham and Whitley Bay faced each other three times last season, the first was a 2-1 victory for the Lang Jacks in the FA Vase.

In November, Whickham edged out 4-3 winners at home, while Bay won the reverse fixture 4-2 in the league, meaning, in those three games, 16 goals were scored between the two teams.

Whitley Bay are currently sitting 16th in the Division One table, but are winless in their last six matches and have lost five consecutive games.

From their nine league games this season, Whitley have won two, drawn three and lost five games, but have talent across the pitch to turn their form around.

During the week, Bay almost pulled off one of the most remarkable comebacks. They trailed 5-0 against Hebburn Town, but scored four goals inside the final 13 minutes of the game to stun the crowd.

Despite not managing to find an equaliser, Whitley will go into the game with Whickham with confidence that they can get their first win in six games.

Assistant Manager Andrew Bulford said: “We step back up to our league again. Although they got beat through the week, Whitley Bay were unlucky not to come out with a draw.

“They were 5-0 down and that’s a great example of why you can’t switch off in the First Division. It doesn’t matter who you’re playing, at the top or bottom, you will get caught out.”