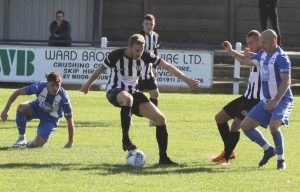 Whickham extended their unbeaten run to three games, in all competitions, as they played out a goalless draw with Whitley Bay.
The first-half sprung to life in the closing stages and the closest either side come to breaking the deadlock was when Dale Burrell’s low cross was turned onto the post by Luke Taylor.
Scott Robson’s effort, just before the hour mark, was cleared off the line by substitute Luke Salmon, but the sides cancelled one another out for most of the second-half.
Following the same pattern as the first 45 minutes, the game had an end-to-end finish, with both sides creating chances. However, neither sides managed to find a breakthrough and a draw was a fair result.
Whickham have their second Northern League Cup group match on Wednesday, against Penrith, before welcoming one of the title-favourites, Hebburn Town, to The First Mortgage Glebe next weekend.
It was a fairly quiet start to the game at Hillheads, with both sides trying to find their feet in the opening 20 minutes.
Full-back Tom Howard almost caught the ‘keeper out with a long-range effort, but Daniel Lister got back in time to keep out the effort.
The Lang Jacks had another chance to open the scoring, this time on 35 minutes. Kieran Galbraith played a free-kick up into the penalty area and Scott Robson’s header was gathered by the ‘keeper.
The biggest opening of the half, came right before half-time. A through ball released Burrell, who took the ball around the approaching Lister.
After evading the ‘keeper, the midfielder played the ball back across the six-yard box, but Taylor got back to divert the cross onto his own post.
Six minutes into the second-half, Whitley went close when Connor Smith played a free-kick to the back post, from the right, and Taylor headed inches wide of the post.
Either side of the hour mark, Whickham managed to hit the target. Firstly, captain Ross Peareth drilled an effort right down Lister’s throat.
The ‘keeper was caught in no-mans-land on 63 minutes when Robson latched onto a through ball. After turning back towards goal, the forward curled across and Salmon headed off the line.
Adam Shanks forced an incredible save from Liam Connell, with his legs, and the two sides went toe-to-toe for the closing stages.
Substitute Andrew Bulford tested the goalkeeper in the first minute of additional time, but Whitley should have snatched all three points in the dying seconds.
Craig Spooner’s decision to play the ball left to Brad Hird, instead of passing to an unmarked Shanks, proved to be costly as Hird’s effort flashed across the face of goal and wide.
It certainly won’t be a game that will live long in the memory of both sides, but a point was a fair result and Whickham turn their attention to their League Cup match with Penrith on Wednesday.
Whitley Bay: Lister, Smith, Bexton, Lowery (Salmon, 55), Kerr, Taylor (Bramley, 76), Spooner, Orrell, Hird, Stephenson (Shanks, 69), Robinson
Sub Not Used: Hubery
Whickham: Connell, Howard, Kay, Gibbons, Galbraith, Grieve, Collins, Burrell (Scothern, 76), Robson (Bulford, 79), Peareth, Cowburn (Their, 64)
Sub Not Used: Little
Referee: Craig Dean
Assistants: Stephen Beresford and Matthew Davidson
Attendance: 317
Photo: Whitley Bay FC