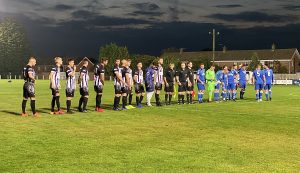 Dale Burrell’s spectacular first-half strike turned out to be decisive as Whickham made it back-to-back victories in the Northern League Cup after a 1-0 win over Penrith.

Ross Peareth skimmed the outside of the post with just two minutes on the clock, while Connor Shields’ cross clipped the crossbar on 14 minutes.

Burrell broke the deadlock with a stunning effort on 21 minutes, letting the ball run across before firing across and into the top corner of the net.

The hosts had plenty of chances to put the game to bed thereafter, but there was drama right to the very end as Penrith were holding on.

In the fourth minute of additional time, the Bonny Blues had a goal ruled out as Grant Davidson’s free-kick came off a teammate, who was in an offside position.

Another three points in the League Cup means Whickham go top of Group G, with Sunderland West End and Jarrow to play at this stage.

Going into the game with Penrith, Whickham were unbeaten in their previous three matches and were going into the match in good form.

During a lively start to the game at The First Mortgage Glebe, Peareth’s early effort, which had the ‘keeper beaten, brushed the outside of post.

Meanwhile, Penrith threatened at the other end when an effort went incredibly close. Both sides settled into the game quickly and the visitors went close, again, on 14 minutes.

Shields’ cross, from the right, clipped the crossbar. The Bonny Blues worked the ball back into the penalty area, to an unmarked Ryan Errington, whose strike was saved superbly by Liam Connell.

Whickham took the lead on 21 minutes and, on the balance of play, it was a deserved goal. Chad Collins played the ball across to Burrell, who took the ball into the area before rifling across and into the top corner. The midfielder just doesn’t like to score ordinary goals.

Just after the half-hour mark, the visitors should’ve been punished for a mistake on the edge of the area. The centre-half was dispossessed by Scott Robson and the forward’s shot was off target by just millimetres.

Both sides made a substitution at half-time and Whickham’s Kelvin Thear almost made an immediate impact when he let a pass run across his body before firing wide of the target.

Penrith’s Daniel Staples made two phenomenal saves on 63 minutes. The ‘keeper pushed away Robson’s strike before getting up and denying Tom Scothern moments later.

There was a warning sign on, 74 minutes, when the Bonny Blues went close, that they were still in the game and Whickham had to be wary of that with just a one-goal lead.

The Lang Jacks could’ve and should’ve put the game to bed in the final minutes of normal time. Firstly, Staples produced a spectacular save to tip away Robson’s strike.

Burrell and Lewis Gibbons also went close, but in the 94th-minute, Penrith thought they’d equalised, but there was late drama.

Davidson’s free-kick struck a teammate and went into the back of the net. The celebrations were cut short as the referee spoke to the linesman, who confirmed the Penrith player was in an offside position.

A fair decision, but the visitors felt aggrieved. In the aftermath, Adam Main was sent to the sin bin, but the official blew for full-time shortly after and Whickham picked up a deserved three points and their third consecutive clean-sheet.