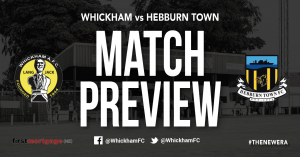 Whickham return back to league action on Saturday afternoon when they play host to league-leaders Hebburn Town.

The Lang Jacks are currently unbeaten in their last four games, winning three of them, and they go into the game off the back of a 1-0 victory over Penrith in the Northern League Cup.

It is also worth noting that Whickham have also kept three consecutive clean-sheets in all competitions and have looked solid at the back.

Whickham and Hebburn faced each other three times last season and the Hornets won all three games, scoring 12 goals and conceding just one goal.

It’s set to be one of the toughest challenges this season for Whickham as Hebburn currently sit top of the Northern League Division One table.

The Hornets are five points ahead of Stockton Town, in second place, albeit having played five more games, but they go into the game this weekend having not won a game in their last two.

A late penalty condemned them to a 2-2 draw with Sunderland RCA during the week, while they suffered a shock 4-1 loss, at home, to Thornaby last weekend.

Assistant Manager Andrew Bulford said: “I’m just really happy with how we’ve been defensively and how hard we’ve worked. That’s all come down to the hard work and that’s all me and Robin ask of the lads.

“There’s a lot of positives to take from the game, against Penrith, and it sets us up nicely for the Hebburn Town match.

“Hebburn will be a good test. They were in the same position as us last year. They had a big turnover and brought some big names in and it took them a while to get together.”

Issue 7 of our matchday programme will be on sale as you enter the ground, priced at £1.50 for 40-pages of exclusive content. 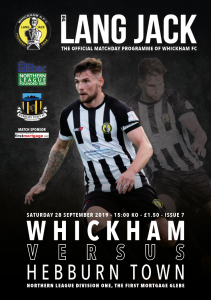 Issue 7 of The Lang Jack