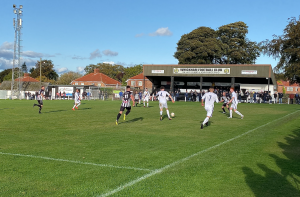 Whickham’s four-game unbeaten streak was brought to an end as they were edged out 3-2 by Hebburn Town at The First Mortgage Glebe.

Hebburn went ahead after 11 minutes when Graeme Armstrong stroke home a penalty, following a handball by Lewis Gibbons in the area.

The hosts responded well though and levelled the game when Kelvin Thear helped a cross on to Carl Finnigan, who found the bottom corner.

Michael Richardson’s stunning free-kick restored Hebburn’s lead on 49 minutes before the Hornets doubled their advantage through Lewis Suddick shortly after.

Whickham battled on and pulled a goal back through Ross Peareth, but were unfortunate not to find an equaliser in the final half-hour of the game.

The Lang Jacks can take a lot of positives from the game, going toe-to-toe with the league-leaders and are next in action away to Penrith next Saturday.

Whickham were boosted with the return of top-scorer Finnigan, who came straight into the starting line-up for the game, with Scott Robson making way.

Both sides settled in the game quickly, but it was the home side, who created the first opening of the afternoon and probably should’ve gone ahead.

Dale Burrell carved open the Hebburn back line with a brilliant through ball. Finnigan took the ball in his stride, but struck wide of the post.

The hosts felt aggrieved on 10 minutes when Hebburn were awarded a penalty. A cross was played into the area, from the right, and Gibbons appeared to be pushed in the back. The ball struck his outstretched arm and the referee pointed to the penalty spot.

Veteran striker Armstrong made no mistake with the spot-kick, firing into the bottom corner to give Hebburn an early lead in the game.

Whickham responded really well after going behind and drew level on 22 minutes. Clark Kay’s corner was helped back across the box by Tom Scothern. Thear steered the ball into the path of Finnigan, who produced a deft touch to find the bottom corner.

Jack Donaghy was on hand to deny Finnigan a certain goal after the striker helped the ball around the ‘keeper, just inside the Hebburn box, and found his effort blocked superbly by the backtracking defender.

Finnigan had the ball in the back of the next for a second time on 40 minutes, however, it was ruled out for offside. Meanwhile, at the other end, Liam Connell was on hand to produce an excellent save to deny Armstrong his second of the match.

Connell kept the score level, right before half-time, again when Richardson’s through ball was latched upon by Suddick, whose effort was saved by the legs of the approaching ‘keeper.

The home side were undone by two quick-fire goals in the first 10 minutes of the second-half. A reckless challenge from Carl Taylor went unpunished, but Gibbons’ foul straight after was awarded.

After a lengthy delay, Richardson stepped up and found the top corner of the net with an exquisite strike from around 25-yards out.

Four minutes later, they doubled their lead at The Glebe. Jack Robson broke free down the right side, crossed low, straight across the six-yard box, and Suddick powered the ball home.

The two sides exchanged chances either side of the hour-mark, but the hosts were lifted when their captain pulled a goal back on 66 minutes.

Kay swung a corner to the back post, with the unmarked Stephen Little heading the ball back across and Peareth pounced and struck the ball home, into the bottom corner.

Whickham continued to match their opponents, stride by stride, and they went in search of an equaliser, with the threat of Hebburn countering and getting a fourth goal always around.

The Hornets should’ve put the game to bed in the third minute of additional time, but Armstrong, from around 10-yards out, struck high over the crossbar.

Nevertheless, Hebburn held on to take all three points away from them, but Whickham will take a lot from the game, despite being edged out by the current league-leaders.