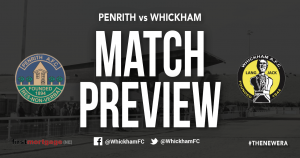 Whickham return to action on Saturday afternoon in search of their first league victory since mid-August when they travel to take on Penrith.

The two sides have only just faced each other, under two weeks ago, when the Lang Jacks edged out 1-0 winners in the Northern League Cup tie.

Dale Burrell’s goal was enough for an important three points in the cup that night, but Robin Falcus’ side will be determined to end their unwanted winless run in the league this weekend.

Penrith go into the game having not won in their last six, in all competitions. Despite sitting bottom of the league, the Bonny Blues played well at The First Mortgage Glebe in the last meeting.

From their 10 league games, Penrith have won just one of those games – against Ryhope CW at the beginning of December – and they’ve also conceded 23 goals in Division One this season.

Assistant Manager Andrew Bulford said: “We need to stick together. We had a bad slump, we got ourselves out of it before. The defeat to Hebburn, yes I wasn’t happy with it, but without those refereeing decisions, we don’t lose that game.

“We’ll get the niggles and injuries sorted out and we’ll be ready for Saturday’s game, which will be another tough one.”