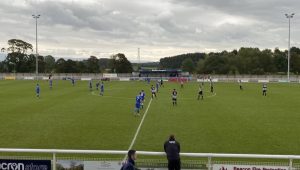 Carl Finnigan scored his ninth goal of the season, but it wasn’t enough as Whickham were edged out 2-1 by Penrith at Frenchfield Stadium.

Ross Peareth was denied an equaliser when his piledriver cannoned off the crossbar, but the hosts continued to press and equalised through Finnigan.

The two sides continued to create openings, but it was the home side that struck next as Coleman drove inside and rifled home, into the roof of the net, on 77 minutes.

Whickham were unable to get themselves back into the game, in the closing stages, and they now haven’t won a league game since mid-August.

The two sides had only faced a week-and-a-half ago, in the League Cup, and the Lang Jacks brought new signing Ross Coombe straight into the starting line-up.

Whickham could’ve broken the deadlock with just 58 seconds on the clock when Peareth’s through ball found Finnigan, whose effort was saved by the approaching ‘keeper.

Kyle May’s effort was bravely blocked in the six-yard box, but the home side were ahead a minute later when Gardner fired across goal and into the far corner of the net.

Coleman skipped past the full-back, on 14 minutes, drove into the area, but was denied by the post, while the visitors also had their head in their hands four minutes later.

Peareth, who was a good 25-yards from goal, unleashed a thunderous effort, which had the ‘keeper beaten, but the shot struck the bar and was cleared thereafter.

Coombe stopped the hosts doubling their advantage on 19 minutes when the shot-stopper kept Coleman’s low effort out.

Finnigan and Matthew Grieve were both denied around the 21-minute mark, but the visiting side continued to threaten and equalised just before the half-hour mark.

A through ball, over the top, was brought down by Finnigan, who held off his marker well, before going through on goal and striking home.

Penrith had a great opening, at the end of the first-half, but after the through ball to found Coleman, the striker opted to lob the ‘keeper and he fired over the bar.

After the break, Finnigan went close on two occasions before Coombe produced an outstanding save, on 63 minutes, to deny Chris Wraighte.

Gardner latched on a mistake at the back on 69 minutes, but his effort flashed across the face of goal and the visitors cleared their lines.

The arrival of Matty Pattison, who came on as a substitute, almost made an instant impact as his low cross was struck by Finnigan, but the shot was blocked well in the box.

Wraighte’s effort was saved by Coombe, but the hosts found themselves ahead on 77 minutes when Coleman produced a moment of brilliance.

After a cross-field ball, Coleman shrugged Clark Kay off the ball, drove inside and powered the ball into the roof of the net to restore Penrith’s lead.

Coleman continued to be a thorn in Whickham’s side, forcing a good save out of Coombe before firing an effort off the crossbar, inside the final seven minutes of the game.

The visitors were unable to create anything in the closing stages and are now winless in their last seven league games. The Lang Jacks take on Sunderland West End, away, in the League Cup on Tuesday night.