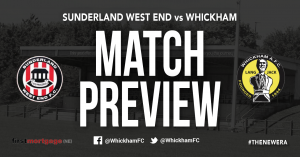 Whickham go into their Northern League Cup match with Sunderland West End knowing a victory would win the group.

The Lang Jacks, who have suffered back-to-back defeats in Division One, have a welcome break on Tuesday evening when they travel to take on West End.

They’ve started the group bay winning both of their opening games and a victory over the Division Two outfit would mean they would qualify for the Last 16 of the competition as the group winners.

Whickham will be aiming to put Saturday’s disappointment straight behind them by turning in a good performance at the Nissan Sports Complex.

West End were promoted from the Wearside League last season and are currently playing in the Northern League for the very first time this season.

They currently sit 17th in Division Two having won just three of their 10 league games so far. At the weekend, they suffered a 3-0 defeat at home to Heaton Stannington.

Meanwhile, they’re still in the running for a place in the top two in Group G after drawing their two games in the League Cup.

An impressive 1-1 draw away to Jarrow was followed up, last week, with a 2-2 draw away to Penrith, with West End scoring two goals in the first five minutes of the second-half.