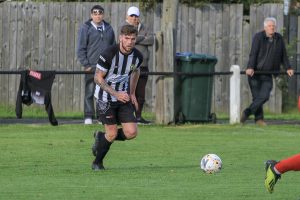 Dale Burrell was on target in the second-half for Whickham, but the Lang Jacks were condemned to a 3-1 defeat at home to North Shields.

During a positive first-half, the hosts struck the post through Matty Pattison on 35 minutes, however, they found themselves two goals down at the break.

Kyle Patton and Scott McCarthy both scored goals on the break, within the final five minutes of the first-half.

Burrell pulled a goal back in the second-half, but Whickham’s momentum took a blow when Stephen Little was shown his second yellow card, just two minutes later.

Patton capitalised on a mistake by Ross Coombe for his second of the game and the Robins were compact thereafter to see out the game for the three points.

The Lang Jacks are in desperate need of a victory in the league after slipping down to 16th in the league table. They take on Division Two side Jarrow in the League Cup on Wednesday evening before a home game against Bishop Auckland next weekend.

Manager Robin Falcus was without the injured Kieran Galbraith for the game, so introduced new signing Alexandros Sakellaropoulos into the starting line-up.

The Lang Jacks came racing out of the blocks, going straight on the attack. Chad Collins cut inside, from the left, and struck wide of the target with just a minute on the clock.

Whickham continued in search of an opener and went close through Little, Collins and then Ross Peareth inside the first 20 minutes of the game.

Shields started to come back into the game, just before the half-hour mark. Scott McCarthy, under pressure, headed narrowly wide of the post.

Burrell was denied the opening goal of the game, on 32 minutes, after a brave, late, block in the penalty area and, three minutes, later, the home side were denied by the woodwork.

A short corner to Lee McAndrew was played back to Pattison, who drove inside before striking low and off the foot of the post.

Patton raced through on goal, after a pass dissected the Whickham back line, and made no mistake with the finish. Five minutes later though, another through ball undone the hosts.

McCarthy was the player, this time, to break through on goal before producing a neat finish, lifting the ball over the approaching ‘keeper and into the net.

Charlie Exley, who had been on the sideline with an injury for five weeks, was brought on in place of McAndrew at half-time as the home side looked to get straight back into the game.

Burrell tested Greg Purvis at this near post, but the midfielder wasn’t to be denied a second time in the second-half, three minutes later.

Pattison’s pass inside to Tom Howard allowed the full-back to pick his through ball to Burrell, who took the ball in his stride before striking home on 52 minutes.

The momentum had swung back in Whickham’s favour, but that was squashed two minutes later when Little was shown his second yellow card for a challenge near the halfway line.

Shields doubled their lead on 69 minutes and Patton couldn’t believe his luck. Nick Cassidy’s free-kick deflected off the wall and Ross Coombe came out to collect the ball.

However, the ‘keeper missed the ball, which allowed Patton to swoop in and take the ball into the empty net for his second goal of the afternoon.

Heading into the final stages of the game, Pattison drew a good save from Purvis, but Coombe was called into action at the other end, just two minutes later.

McCarthy was denied by an excellent save and the ‘keeper reacted quickly to close down Chris Salmon at the near post and turn his effort behind for a corner.

The visitors went close on a few more occasions in the final minutes and they saw the game through to complete a league double over the Lang Jacks.