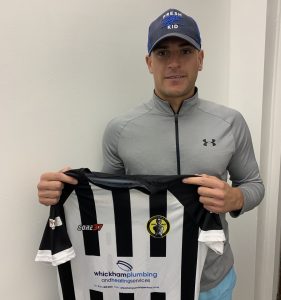 Whickham are delighted to announce the signing of former Bristol Rovers and Darlington defender Jonny Burn.

The 24-year-old has a great professional background having started as a youth player at Sunderland and Middlesbrough before going on to play for the likes of Oldham Athletic, Kilmarnock and York City.

Burn, who made his debut for Oldham against Walsall in 2015, said that he’s delighted to have joined the Lang Jacks and is looking forward to starting with his new team.

He said: “I’m joining Whickham as it’s a club that’s going forward with a lot going on. It will be good for me to get back playing week-in, week-out and get back to my best.

“They have a good set-up. I spoke to the gaffer and they are hoping for big things from the club, so it was a no brainer to come and give my best for the club and move them up the leagues.”

The defender will bring quality and experience to the side, who are looking to turn their fortunes around in the league. Manager Robin Falcus is “delighted” to have got the deal over the line.

“I’m delighted to have Jonny on board,” Falcus said. “We’ve been tracking him for about six weeks now. After initially thinking we didn’t have a chance, we’ve got the deal finalised and getting him on a contract.

“That’s massive for the club and it’s going to give everybody a lift here. We’d like to thank Neil Wilson for making it happen and we appreciate everything he does for the club.”

Burn could make his debut in the Northern League Cup group stage match against Jarrow on Wednesday evening.