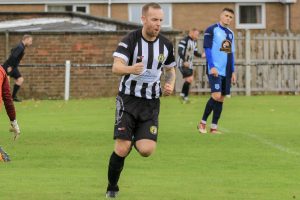 Whickham are now winless in their last nine Northern League Division One matches after a 4-1 defeat at home to Bishop Auckland.

Against the run of play, the home side went ahead through Andrew Bulford, but the visitors turned the game around to lead through Darren Richardson and Kyle Fryatt.

Fryatt scored both of the goals, to complete his hat-trick, in the final 25 minutes of the match as Bishops ran out deserved winners at The First Mortgage Glebe.

The Lang Jacks are now just two points above the relegation zone and have two games next week, starting with a home game on Wednesday evening against National League North side Darlington in the Durham Challenge Cup.

Manager Robin Falcus was without top-scorer Carl Finnigan, but introduced youngster Daniel Cranston into the starting line-up for the first time.

It was the visiting side that started the game quickly and on the front foot. With just two minutes on the clock, Ross Coombe kept out Kieron Parnaby’s effort before denying Fryatt at the near post.

Coombe was on hand, two minutes later, to make a point-blank save to James Fairley. Whickham’s first attack was on 10 minutes, with Jonny Burn heading wide of the target and Matty Pattison fired inches over the bar shortly after.

After starting the game slowly and on the back foot, the hosts took the lead. Pattison’s corner was helped on by Alexandros Sakellaropoulos before Bulford fired home to put his side ahead.

The Lang Jacks worked a glorious opening on 23 minutes, to double their lead, but Pattison’s hard work and terrific delivery missed everybody in the six-yard box and went out of play.

A moment of sheer brilliance saw the visitors draw level in the game on 34 minutes. Richardson drove into the Whickham half, past a challenge, and lobbed the ‘keeper from 35-yards out.

Just four minutes after Burn was denied by Nick Liversedge, the visitors went ahead in the game, just before half-time. Fryatt was down the left flank in a flash, drove inside, past the full-back, and fired home.

The first chance of the second-half went Whickham’s way, with Tom Scothern’s corner being glanced on by Sakellaropoulos. Bishops went to the other end and really should’ve scored a third goal, but Fairley squandered a glorious opportunity.

Bulford and Kyle Morris went close for their respective sides, but the hosts were unfortunate not to draw level on the hour. Scott Robson’s effort was saved by Liversedge before Cranston’s rebound was cleared off the line.

Robson’s pass across to Pattison allowed the midfielder to make space on the edge of the area and get his shot away, but the goalkeeper was equal to it and turned the ball around the post.

Two minutes later, the home side were made to pay for a mistake. Sakellaropoulos’s cross-field pass, in his own half, was intercepted by Fryatt, who raced through on goal and tucked the ball into the bottom corner.

Whickham created a really good opening on 73 minutes when Robson found the advancing Lee McAndrew, whose shot was deflected.

Nevertheless, the advancing Cranston was first to the rebound and his strike was cleared off the line by Thomas Bott. Despite trailing in the game, the hosts didn’t manage to create much thereafter, besides from a Burrell effort, which went wide of the target.

Substitute Jamie Tumilty missed the target on 89 minutes, but in the final minute of additional time, Fryatt rounded off a fine performance by scoring his third goal of the afternoon. The winger rounded the ‘keeper and tapped into an empty net.

The defeat leaves the Lang Jacks teetering near the relegation zone in Division One and their next league match is away to Ashington next Saturday afternoon.