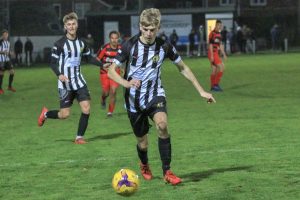 Max Cowburn scored a brace as Whickham booked their place in the Last 16 of the Durham Challenge Cup after beating Darlington 5-0 at The First Mortgage Glebe.

Scott Robson was brought down in the penalty area on the half-hour mark and Cowburn converted to put the home side ahead in the first-half.

Robson doubled Whickham’s advantage before Carl Finnigan made a scoring return for the Lang Jacks on the hour mark.

Cowburn’s second of the night came on 74 minutes and Dale Burrell wrapped up a terrific evening for the hosts with a goal in the final stages of the game.

The Lang Jacks await the draw for the next round of the competition, but their attention now turns swiftly to the league match, away to Ashington, on Saturday afternoon.

Manager Robin Falcus was given a boost as Finnigan, Kieran Galbraith and Lewis Gibbons were all returning from being on the sideline with injuries.

The home side came out the blocks quickly and looked comfortable in the opening exchanges with Tom Scothern and Chad Collins going close.

Cowburn, who was just inside the Darlington half, struck first-time and the effort had the ‘keeper beaten, but missed the target by a few inches.

After Finnigan had his first sight of goal on 17 minutes, the visitors went to the other end and created their first opening as Justin Donowa was denied by Adam Bartlett.

Brandon Morrison drew a great save from Bartlett two minutes later, but it was the home side, who got another foothold in the game and looked threatening.

In the 23rd-minute, Cowburn swung a corner into the box, which was helped on by Finnigan, but Robson’s back-heel went straight into the arms of the ‘keeper.

The forward was involved in the heart of the action again, on 29 minutes, and he won his side a penalty after being brought down by Osagi Bascome in the area.

Cowburn stepped up and put the home side ahead, despite the Darlington ‘keeper getting a hand to the spot-kick. The visitors threatened on the break late in the first-half, but Whickham had the lead at the break.

After half-time, Darlington come out rejuvenated and were the better team for the first 10 minutes of the second-half, with Lucas Bell’s effort being blocked by Kieran Galbraith in the six-yard area.

However, the hosts went and doubled their lead on 56 minutes. Lewis Gibbons’ effort was spilled by Chris Elliott and Robson was on hand to react quickly to sweep home the rebound.

Donowa flashed an effort across the face of goal before Collins struck the stanchion on 58 minutes. The home side were awarded their second penalty of the game a minute later when Lewis Alderson tackled Robson from behind and fouled him in the area.

Collins’ penalty was saved low by the ‘keeper, who denied the midfielder again on the rebound, but the hosts weren’t to be denied a third time as top-scorer Finnigan was on hand to head home from close range.

Whickham continued to look comfortable and they scored their fourth of the night on 74 minutes. It was a move, which started with Tom Scothern’s strong challenge on halfway to win the ball back for the hosts.

The midfielder played the ball through to the advancing Finnigan, who pulled the ball back to Cowburn and the youngster rifled home into the roof of the net for his second of the evening.

With the game entering its final stages, the hosts added another to their tally. Galbraith’s tremendous ball over the Darlington back line released Burrell, who powered his effort past the ‘keeper and into the net.

Finnigan was denied by the Darlo ‘keeper on 89 minutes, but the Lang Jacks got the job done, got back to winning ways and will take plenty of confidence from the victory into Saturday’s league match.