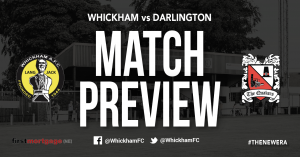 Whickham will be looking to bounce from from Saturday’s defeat when they play host to National League North side Darlington on Wednesday evening.

The Quakers are expected to bring a youthful side for the Durham Challenge Cup match, but it’s likely that a few first-team players could be involved in the game.

Robin Falcus’ side are now winless in their last nine league matches, but have got to the First Round of the DCC after a victory away at Silksworth CW.

Darlington come into the game against Whickham having won five-straight matches in all competitions.

Their last defeat was in the home game against York City back in mid-September and they are one of the form teams at the moment.

On Saturday, they qualified for the First Round of the FA Cup after beating Tamworth. There is likely to be a mixture of youth and first-team players in the squad tonight, but, nevertheless, they will provide a tough test for their opponents.

Manager Robin Falcus said: “We drew Darlington a few years ago and they brought a youthful team up then. When the draw was made, I had that in the back of my mind and a feeling that they may do the same this time around.

“I was hoping that they would bring their big-hitters up, so we could get a good gate and really have a good test against a really top team. However, we aren’t taking this game for granted, not at all.

“We will be putting a very strong team out because they may have a few first-teamers in there. We’re just not too sure.”

Issue 11 of our matchday programme will be on sale as you enter the ground, priced at £1.50 for an issue full of exclusive content. 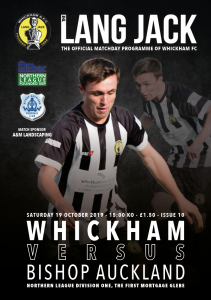 Issue 11 of The Lang Jack