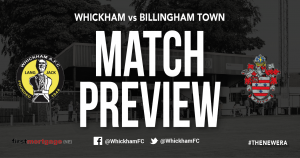 Whickham return to league action on Wednesday evening when they welcome Billingham Town to The First Mortgage Glebe.

The Lang Jacks were last victorious, in league action, back in mid-August and have been handed a boost, with a number of players coming back from injury.

Their game against Ashington, on Saturday, was postponed due to a waterlogged pitch, so it’s been a week since the Lang Jacks were in action – a 5-0 win against Darlington in the Durham Challenge Cup.

Billingham Town have settled into life in Division One well and currently sit mid-table at the end of October.

In their last 13 matches, only six have been in the league and Billingham Town have won four, drawn one and lost just one match.

Meanwhile, they progressed through to the Second Round of the Durham Challenge Cup, just like Whickham, after a 3-0 win away at Sunderland West End.

They will also be hoping to return to winning ways in the league after suffering a 1-0 defeat to Newton Aycliffe in their last match in Division One.

Manager Robin Falcus said: “We’ve just got to look forward to our next game, which is tonight against Billingham Town. As a team, and as a manager, I’m positive because there’s players coming back.

“We’ve got Kieran (Galbraith) back, Lewis Gibbons and Finners had come back in and it looks like Conor Newton is only a week or two weeks away from returning.”

Issue 12 of our matchday programme will be on sale as you enter the ground, priced at £1.50 for an issue full of exclusive content. 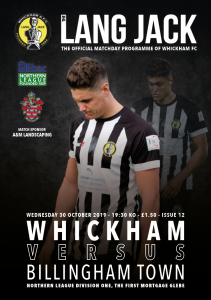 Issue 12 of The Lang Jack