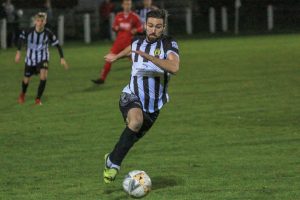 Whickham are now winless in their last 10 league matches after a 4-1 defeat against Billingham Town at The First Mortgage Glebe.

Scott Robson was brought down in the area and Lee McAndrew dispatched the penalty to put the home side ahead on 29 minutes.

Craig Hutchinson scored two brilliant goals in the final 10 minutes of the first-half to turn the game around for the visitors.

Ash Lavan found the net nine minutes into the second-half and Town wrapped up the points when Elliott Beddow struck home on 67 minutes.

The defeat leaves Whickham two points above the bottom three and have lost eight of their last 10 league games – a run stretching back to mid-August.

Robin Falcus’ side were going into the game off the back of a 5-0 win over Darlington, but started the game on the back foot as Billy Town came out the blocks quickly.

After threatening in the final third in the first exchanges, Town created their first chance on 14 minutes when Beddow struck just wide of the post.

Jonny Burn and Carl Finnigan had half-chances on around the 18-minute mark, but an intelligent passage of play saw the hosts win a penalty on 28 minutes.

Daniel Cranston, after a driving run forward, was fouled. The midfielder reacted quickly to take the free-kick straight away to Robson, who tapped the ball around the ‘keeper and was brought down.

McAndrew stepped up and tucked the penalty into the bottom corner to give the home side the lead, just before the half-hour mark.

Just under a minute after Burn forced Bradley Young into making a terrific save, Town equalised. A through ball was cleared by Ross Coombe, as far as Hutchinson, who, first-time, struck home from 25-yards out.

The striker was involved in the heart of the action again, right on the stroke of half-time. Another through ball down the channel forced Coombe into coming out of his box. His clearance, again, found Hutchinson, who found the top-corner for his second of the game.

Whickham had a chance, just four minutes into the second-half, but Tom Scothern, who gathered the ball in the box, was denied by the ‘keeper at his near post.

The visitors doubled their advantage in the game on 54 minutes, when Lavan’s strike, from the edge of the area, took a huge deflection off Dale Burrell and found the net.

Two minutes later though, the home side squandered a huge opportunity to reply straight away. Burn’s deep free-kick was headed down and an unmarked McAndrew snatched at his effort and struck wide from inside the area.

Billy Town stretched their lead further when Lavan’s through ball released Beddow, who raced through before slotting the ball home.

Cranston’s effort on 71 minutes was saved well by the ‘keeper, but the visitors negotiated the final stages of the game to take home the three points.