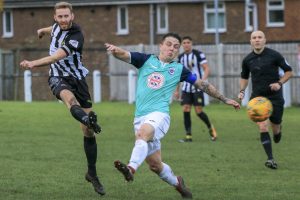 Whickham have slipped two places in the Northern League Division One table after being edged out 3-2 by Seaham Red Star.

The hosts responded well though and Tom Scothern pulled a goal straight back, with the midfielder curling into the bottom corner on 15 minutes.

Carl Finnigan levelled the game just after the half-hour mark, but the visitors had the lead at the break thanks to Scott Young, who scored right on the stroke of half-time.

Both Whickham and Seaham created some great openings in the second-half, including Scott Robson hitting the crossbar, but it was the visitors, who took home the three points – the two sides meet again on Tuesday evening.

Interim managers Matty Pattison and Leepaul Scroggins were taking the team for the first time, following the resignation of Robin Falcus on Thursday afternoon.

The home side started brightly and on the front foot. With just two minutes on the clock, Seaham goalkeeper Chris Bannon made a brilliant save to keep out Scothern’s volley.

Just a minute later, a cross found Kieran Galbraith at the back post. The defender helped the ball across the face of goal, but no Whickham player managed to direct the ball goalwards.

Seaham’s first opening followed four minutes later when Sean McRoberts’ dangerous cross was glanced on by Wilson and narrowly wide of the post.

Moments after having a penalty appeal turned down, the visitors were awarded a spot-kick. Dale Burrell was side-by-side with Wilson before the striker went down under minimal contact.

Wilson made no mistake with the penalty, dispatching it into the bottom corner. The striker doubled Seaham’s advantage two minutes later when he found the net following a powerful run forward.

Whickham responded well and responded immediately after going two-goals down. Robson handed the ball off to Scothern, who curled home, into the bottom corner, first time.

Daniel Cranston’s cross, from the left, was glanced on by Finnigan, but narrowly wide. It wasn’t long until the striker was involved in the action again.

Burrell’s free-kick, from near the halfway line, was played up into the box and headed down by Robson. Lee McAndrew played the ball across the face of goal and Finnigan tapped home from close range.

The home side closed out the first-half on the front foot. Ross Peareth’s stunning effort was tipped around the post by Bannon before Burrell headed over from the resulting corner.

Whickham were dealt a blow right on the stroke of half-time as they conceded a third goal. Richard Coulson won the ball back in the opposition’s half, which set up McRoberts.

The winger drove into the box, but his shot was deflected. Nevertheless, the ball came across the box and Young hammered home at the back post.

Wilson and Burrell exchanged chances in the first seven minutes of the game, but it was the hosts, who should’ve opened up another two-goal lead, on 58 minutes.

David Henderson whipped a cross into the area, but Wilson’s header missed the target by inches. Four minutes later, the home side were denied by the woodwork.

After a well-worked move forward, the ball broke to Robson in the penalty area and the forward’s shot cannoned off the bar and Seaham cleared their lines thereafter.

As the second-half progressed further, the home side started to push forward more in search of an equaliser and Seaham almost capitalised on 79 minutes.

The visitors won the ball back inside their own area and broke forward. David Robinson pulled the ball back across the box, but Wilson was unable to keep his shot down.

Peareth and McAndrew both tested Bannon, in the Seaham goal, in the closing stages, but the home side were unable to find the net a third time and were edged out at The First Mortgage Glebe.