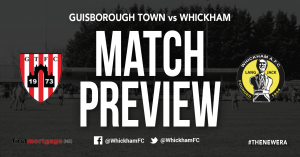 Whickham are back in action on Saturday afternoon when they travel down to take on Guisborough Town at the King George V Ground.

The Lang Jacks have happy memories of the ground as they won 3-2 there last season thanks to goals from Max Cowburn, Dale Burrell and Andrew Bulford. In the reverse fixture, the two sides played out a goalless draw.

Matty Pattison remains in charge of the team for the game down in Cleveland and will be hoping the side are able to end their winless run in the league.

After falling behind early against Seaham Red Star in their last match, Whickham come back to level, but were edged out 3-2 in the end and were unfortunate not to pick up anything from the game.

Guisborough currently sit 11th in the Division One table and have won one of their last six league matches.

In their last two matches, they lost 4-0 against Newcastle Benfield in the FA Vase last weekend and 4-1 at home to North Shields in their last league match.

Striker Danny Earl was made available for transfer this week, so the Priorymen will be without the prolific goal-scorer on Saturday afternoon.

Interim Manager Matty Pattison said: “I know it’s a cliché, but there’s no easy games in this league. We know this is going to be a tough game.

“We just need to manage it, be prepared, be organised and then we need to have a proper away performance, where we go and get the result because we really need it.

“If we get the result, it will give everybody a lift, everyone at the club. It’ll give us a chance to build from there.”