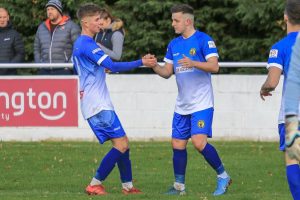 Max Cowburn found the net in the first-half, but Whickham slipped to another league defeat as they suffered a 3-1 loss away to Guisborough Town.

Cowburn handed the Lang Jacks the lead, after a positive start, on eight minutes, but Steven Roberts equalised for the hosts just five minutes later.

The home side went ahead on 23 minutes when Alexandros Sakellaropoulos tried to clear Roberts’ effort, but his clearance hit the post, struck the defender and went into the net.

Carl Finnigan struck the crossbar early in the second-half, but, late in the game, when the visitors were pressing for an equaliser, the home side wrapped up the points through Roberts.

Whickham remain bottom of Division One after the loss and have a week to prepare for their home game against Ryhope CW next Saturday.

Interim manager Matty Pattison made a couple of changes to the side that lost against Seaham Red Star last weekend and it was the Lang Jacks, who started brightly.

Tom Howard’s cross-field pass as brought down by Chad Collins and Cowburn curled inches over the crossbar.

Just two minutes later, the hosts took a deserved lead. Dale Burrell’ stunning pass over the back line was brought down by Cowburn and the wide man slotted home thereafter.

The hosts responded, though, and equalised just 10 minutes later. A though ball released Roberts, who lifted his effort over the ‘keeper and into the far corner of the net.

Despite matching their opponents, the visitors fell behind on 23 minutes. Mason McNeill’s ball over the top released Roberts, who prodded an effort goal wards.

Sakellaropoulos raced back towards his goal line to clear the ball, but he diverted his clearance off the post and the ball come back off the defender and found the back of the net.

Cowburn had a good chance, from a set-piece, to test the keeper, but his effort was gathered, while, at the other end, Adam Bartlett was called into action, tipping Roberts’ terrific strike over the bar.

Lee McAndrew had a chance, just after the half-hour mark, but it was the home side that went incredibly close to doubling their advantage. Sonni Coleman helped on Harry Thompson’s pass to Roberts, who fired narrowly wide.

Just like the first-half, it was the Lang Jacks, who come out firing and were the better side in the opening exchanges.

Finnigan managed to beat the offside trap on 50 minutes, taking the ball away from the approaching ‘keeper. The striker turned back towards goal and his curling effort struck the top of the bar.

The visitors continued to press in search of an equalising goal. Collins’ shot was headed bravely by Josh Rowbotham, in the area, before Howard struck narrowly wide just before the hour-mark.

Tom Scothern had the ball in the net soon after, but the whistle had already been blown for a high foot from Finnigan.

Whickham committed more men going forward going into the closing stages and Guisborough went close on 82 minutes after breaking out from the back.

A through ball released Coleman, but the striker was denied superbly by Bartlett, who was quick off his line to make the stop.

Three minutes later, the home side doubled their lead, which felt like a sucker punch after a positive performance in the second-half from the Lang Jacks.

Just to the left of the Whickham penalty area, the visitors lost possession. The ball was worked into the box and Roberts swept home for his second of the afternoon.