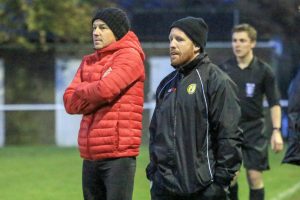 Whickham Football Club are delighted to announce the appointment of Matthew Pattison as the club’s new manager.

The former Newcastle United midfielder, who has been in temporary charge of the team for the last two matches, will take over and aim to turn the team’s fortunes around.

Pattison is now in his second season with the club, following a spell with South Shields, and the newly-appointed manager has brought in John Oster as his assistant.

Speaking about his first managerial role in senior football, Pattison said it was an “easy decision” to make and is looking forward to the challenge ahead.

“It’s a fantastic opportunity,” Pattison said. “There’s a lot of buzz around the place. The club wants to go places, so it’s a fantastic start for me in terms of management.

“I know the club pretty well now. I know what it’s about and where it wants to go. For me, it was an easy decision in the end, when I’ve sat down and thought about it.”

Pattison’s knowledge and experience is unrivalled. The midfielder had the honour of playing for his country, South Africa, and also under some of the best managers, including the likes of Sir Bobby Robson.

Oster, who made 13 appearances for Wales, is stepping into his first role is management, but also has vast experience under his belt. He started his career with Grimsby Town before going on to have spells with Everton and Sunderland.

In 2005, Oster moved to Burnley before a three-year stay with Reading, where he helped the Royals gain promotion to the Premier League for the first time in 2006.

After a short spell with Crystal Palace, the former Wales international made over 100 appearances for Doncaster Rovers. Oster finished his career, after a season with Barnet, in the North East with Gateshead.

Oster and Pattison played together with the Heed and the pair have a great relationship and when the former received the phone call about coming on board, he described the opportunity as a “no-brainer”.

He said: “I’ve been out of football for three or four years now and never really thought about going back in and trying the coaching side of things.

“I heard that Patta got the job and he sent me a message asking if I’d be willing to give it a go. I came over, spoke to him and everyone involved and thought ‘why not’.

“I spoke to Neil, he’s just so enthusiastic and so positive about the club and where he wants to be with it. It was a no-brainer in the end. It was the feel-good factor, he sold it to me.”

The first game under the new management team will be the home game against Ryhope CW this coming Saturday.