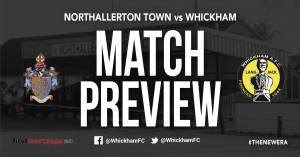 Whickham are back in action as they travel to Northallerton Town on Saturday afternoon, in what will be Matty Pattison’s first game in charge.

The Lang Jacks were all set to take on Ryhope CW, at home, last weekend, but a late postponement meant Pattison had to wait for his first match as manager of Whickham.

The match at the Calvert Stadium sees two of the bottom three teams go head-to-head. A huge three points is at stake and a win could potentially mean Whickham climb up a few places – with just three points separating the bottom six clubs.

Whickham last faced Northallerton back when the two sides were in Division Two together. The Lang Jacks took home all three points in April 2018 after a 3-2 victory away from home.

In their first season back in Division One, Northallerton currently sit 18th in the league having won four of their 16 games this season.

Darren Trotter will have new signing Lee Brockbank in the squad for the game after Town signed the full-back on loan from Marske United.

Nick Martin will, no doubt, be one of Northallerton’s key players. The striker signed for Town in 2016 and notched his 250th Northern League goal during the 2018-19 season.

Manager Matty Pattison said: “It’s excited. It’s a new start. Myself and John have had a couple of weeks now to get to work with the lads.

“We’re looking forward to the game. We are hoping the boys have taken on board what we spoke about, put it into the game and go into the game full of confidence. Then hopefully we can get the result.”

He continued: “You’re going away from home, so it’s going to be a tough game. I’ve said many times before that there are no easy games.

“We’re looking to get that win that we need and the win that we’ve probably deserved over the last couple of weeks. I’m expecting the boys to be chomping at the bit to get into the game and get going because they missed last week.”