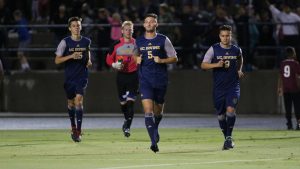 Whickham FC are delighted to announce the signing of defender Darren Hamilton.

The 24-year-old has recently returned back to the UK, following a spell playing in Sweden, and the highly-rated centre-back becomes Matty Pattison’s first signing as manager.

Hamilton said: “I’m just looking to get my name back out there, playing in England. I’m grateful Whickham has given me the opportunity to do that.

“The most important thing for me is to get back game fit and help the club as much as I can until the end of the season.

“I’m excited to get to work with Matty and John as I think a lot can be learned from them.”

Hamilton, who is from Wallsend, went out to the US in 2015 and spent two years studying and playing at East Central Community College in St. Louis.

After transferring to Hartwick College, where he spent a year, he then moved to UC Irvine and was named to the 2018 Conference Second Team.

Following his graduation earlier this year, the centre-back signed with Säffle FF, who play in Division 3 Västra Svaeland.

Speaking of the signing, Pattison said that he was delighted to bring Hamilton to the club and is excited to see what the defender can add to his squad.

He said: “Darren has been training with us for the last few weeks and I’ve been very happy with him.

“I’ve also had the opportunity to see him in games, so it’s a case of bringing him in alongside the quality we already have at centre-back.

“He will compete with those players, which is what we need, that strength in depth, so I’m delighted to have him in.”