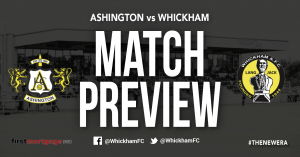 After two weeks without a match, Whickham return to action on Saturday afternoon when they take on Ashington at Woodhorn Lane.

The Lang Jacks ended their unwanted league run of no win since mid-August when they beat Thornaby 2-0 earlier this month.

However, postponements have hampered Matty Pattison and John Oster’s tenure since then, but both will be aiming for maximum points in the six-pointer against the Colliers.

Ashington are also on a baron streak of their own, the Colliers are without a win in their last eight games in all competitions.

The two sides faced each other twice last season, with the Colliers winning 3-2 at home, but Whickham won 5-0 at The Glebe later in the campaign.

Ashington currently sit 16th in the Northern League Division One table with a record of five wins, one draw and 12 defeats in their 18 games this season.

The Colliers, during their run of eight straight defeats, have conceded 28 goals and were also knocked out of the Northumberland Senior Cup.

In their last outing, Ian Skinner’s men were edged out 3-2 by Whitley Bay. After trailing in the game, the Colliers were leading 2-1, but then conceded two goals in the final half-hour.

A win for Ashington could see them climb up one place in the league table, while a victory for Whickham could mean they move above the Colliers.

Assistant Manager John Oster said: “It’s a so-called six-pointer really, with them only being two points in front us.

“Having looked at the table, they’ve lost their last eight games, so hopefully, if we go there and play near the levels that we played in our last few games, we’ll hopefully get something from the game.

“Having the game called off last Saturday has enabled some of the lads, who were struggling for the game, a few more days to get fit, so fingers crossed we’ll have more bodies back for the game, which is good.”